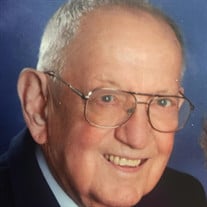 Harold Albert “Al” Sherline, (93) returned to his heavenly home on Wednesday, January 9, 2019, surrounded by his family. His devotion to his family and his firm belief in God supported him and ultimately brought him peace. Al was born to the late Herman M. Sherline and Margaret Bisset in Brooklyn, NY, on July 8, 1925. He grew up in Bethesda, MD, near Washington, D.C., playing sports and helping his mother garden. He was the youngest of three children and was preceded in death by his siblings. He tells stories of seeing professional baseball games at Griffith Stadium in Washington, D.C. for a nickel and seeing the original Frankenstein movie as a kid that caused him to not sleep for a month. He hitchhiked to and from school many days and played baseball well into the night. Al attended Bethesda-Chevy Chase (BCC) High School and excelled in both basketball and baseball. After high school he enlisted in the U.S. Marine Corps in 1943 to serve in WWII. He served as a corporal in the South Pacific one tour of duty until 1946. He was located on Tinian Island when the Enola Gay lifted off with the atomic bomb used to end the war. After the war he came back to attend the University of Maryland and graduated in 1954 with a degree in Physical Education. While living in the DC area, he met his future wife and love of his life. His first coaching position was with Eastern Junior High School in Silver Spring, MD, from 1952-54. He then moved to Illinois and became a teacher, coach and administrator at Williamsville High School from 1954-1956. He furthered his career as Athletic Director and basketball coach at Taylorville High School from 1956-1962 and took his 1959 team to the state playoffs. During this time, he also attended the University of Illinois and received his Master’s Degree in Education in 1959. The family then moved to the Chicago area and Al became head basketball coach at the newly opened Elgin Larkin High School and served there from 1962-1967. He coached a cross country team to the state finals at Larkin. Al was an educator at heart as he dedicated the next 31 years of his life to the Mattoon Area Adult Education Center. The family moved to Mattoon in 1967. He led a team of teachers that provided vocational skill training and GED equivalent degrees in order to help many area students find meaningful work. The adult center also had a day care and kindergarten program and he greeted the hundreds of children they served throughout the years each day with a positive attitude and a smile. He received numerous education awards throughout his career including “Adult Educator of the Year” in 1973 and was appointed to the State Advisory Council Adult, Vocational and Technology Education, Illinois, The State of Illinois declared “Al Sherline Day” when he retired in 1998 because of his years of work in adult education. He was a member of the Retired Teachers Association of Coles County. He also attended the First Baptist Church of Mattoon where he was found with a shiny penny or a piece of candy in his pocket for all the children. Al loved to visit the YMCA and see his friends while he worked out. As a former marine, he was very patriotic and never missed a parade in the streets of Mattoon. The marching bands and the American flag were his favorites. He also coached his children in sports and in life. He was a firm believer in PMA – positive mental attitude and mind over matter. As part of “The Greatest Generation,” Al will be missed. Harold married Aileen Mitchell on August 3, 1956, in Springfield, Illinois. They were married for 60 years. With Aileen being from North Carolina and Al from Maryland, their summer vacations were spent up and down the east coast with their families. They loved all the beaches from Myrtle Beach, SC, to Ocean City, MD. Most recently he loved hearing of his grandchildren and great-grandchildren participate in church, in school, in music and in sports. Al is survived by his daughters, Dixie McQuality (Rod) of Sherman, IL, Lori Coady (Tim) of Taylorville, IL; his son, Chuck Sherline (Michelle)of Chicago, IL; his grandchildren, Matt McQuality (Kelsey) of Avon, OH, Cara Kern (Nathaniel) of Chatham, IL, Tyler and Nathan Coady of Taylorville, IL, James and Sophia Sherline of Chicago, IL; and his great-grandchildren, Landon and Keegan McQuality of Avon, OH and Kinsley Kern of Chatham, IL. A Celebration of Life in his honor will begin at 12:00 P.M., Saturday, January 12, 2019, at the First Baptist Church of Mattoon, 1804 S. 9th Street, Mattoon, IL 61938, with Reverend Dennis Strawn officiating. The visitation will be held from 10:00 A.M. until the time of service at the church. He will be buried with military honors at a later date at Camp Butler National Cemetery in Springfield, IL. Mitchell-Jerdan Funeral Home, located at 1200 Wabash Avenue, Mattoon, IL 61938, is assisting the family with arrangements. In lieu of flowers, donations may be made to the Mattoon First Baptist Church. Please visit www.mitchelljerdan.com or www.facebook.com/mitchelljerdanfuneralhome to light a virtual candle in his honor or memory with the family.

Harold Albert &#8220;Al&#8221; Sherline, (93) returned to his heavenly home on Wednesday, January 9, 2019, surrounded by his family. His devotion to his family and his firm belief in God supported him and ultimately brought him peace. Al... View Obituary & Service Information

The family of Harold Albert "Al" Sherline created this Life Tributes page to make it easy to share your memories.

Send flowers to the Sherline family.