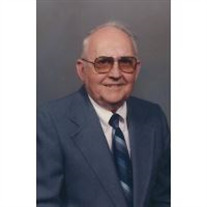 Mattoon, IL-Harley 'Gene' Gill, age 92, of Mattoon, IL, passed away at 12:33 p.m., Tuesday, June 16, 2015, at his daughter Melinda's residence while surrounded by his daughter, Melinda, family friends, and his canine companion, Roiri.\r\n\r\nThe funeral service in his honor will begin at 11:00 a.m., Monday, June 22, 2015, at Mitchell-Jerdan Funeral Home, 1200 Wabash Avenue, Mattoon, IL 61938, with Reverend Tom Fedrigon officiating. Interment will follow in Humboldt Township Cemetery. Visitation will be held at the funeral home from 10:00 a.m. until the service begins. \r\n\r\nBorn August 23, 1922, in Shelby County, IL, Gene was the son of Harley Gill and Helen (Driscoll) Niemeyer. He married Charlotte LeGrand on September 21, 1947. She preceded him in death in October, 2011. Survivors include two daughters, J. Darlene Bartlett and husband John, and Melinda Gill, both of Mattoon, IL; three grandchildren, Angie Shumaker and husband Jason of Pesotum, IL, Scott A. Moberley of Carbondale, IL, and John Ryan Bartlett of Charleston, IL; two great grandsons, Cody and Spencer Shumaker of Pesotum, IL; a stepbrother, E.C. Niemeyer of Arvard, CO; a sister-in-law, Barbara LeGrand of Lerna, IL; a nephew, Randall LeGrand; and a niece, Jana Barker and her daughters, Jaime Barker and Willow Figgins, all of Charleston, IL. In addition to his wife, he was preceded in death by his parents, and a sister. \r\n\r\nGene was a member of the St. Paul's Lutheran Church. For 22 years, he was employed as a bookkeeper for Niemeyer Coal Company. He then worked at Eastern Illinois University as a building service worker until retiring in 1994. \r\nMr. Gill served our country honorably with the United States Army during World War II. He was stationed in the European Theater and received the Purple Heart after he was wounded when his unit was bombed. Gene was extremely dedicated to his country and was rewarded for his dedication in October of 2011 when he was given the East Central Illinois Honors Flight to Washington, DC, on which he was accompanied by his grandson, Scott. \r\n\r\nGene was a charter member of the Mattoon VFW Post 4325, and one could not find a more dedicated St. Louis Cardinals fan. His daily visits to Cracker Barrel were the highlight of his day. \r\n\r\nIn lieu of flowers, memorial contributions in his honor may be made to the Lincoln Land Hospice, Prairie Pavilion 2, 1004 Health Center Drive, Suite 202, Mattoon, IL 61938.\r\n\r\nPlease visit www.mitchell-jerdan.com or www.facebook.com/mitchelljerdanfuneralhom to light a virtual candle in his honor or share a memory with his family. \r\n

The family of H. Gene Gill created this Life Tributes page to make it easy to share your memories.

Send flowers to the Gill family.