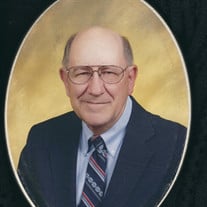 H. Carl Etchason, age 85, of Mattoon, IL, passed away at 4:30 p.m., June 5, 2015, at the Houston Hospice Unit in Houston, TX. A celebration of his life will begin at 11:30 a.m., Saturday, August 22, 2015, at the First Presbyterian Church of Mattoon, IL. Visitation will be held from 10:00 a.m., until the service begins. A luncheon will be served in the Fellowship Hall following the service; all friends and family are invited. Born August 22, 1929, in Clay County, Illinois, Carl was the son of William C. and Mary Alice (Meares) Etchason. He married Sibyl E. Oder on April 12, 1957, in Effingham County, IL. Survivors include his loving wife of 58 years, Sibyl Etchason of Mattoon, IL; two children: Susan Hoppe and husband James of Missouri City, TX, and Tom Etchason and wife Christine of Park Ridge, IL; five grandchildren: Kelsey, Andrew, and Brooke Hoppe, and Jack and Jill Etchason; sister-in-law, Ilene Etchason; and many nieces and nephews. He was preceded in death by his parents and two brothers, James and Charles Etchason. Carl graduated from Farina LaGrove High School in 1947. He served our country with the U.S. Army in Korea from August 1951 to July 1953. He then attended Eastern Illinois University earning a BS in Education in 1957, and an MS in Guidance in 1961. From 1958 until his retirement in May of 1989, Carl was a teacher of Social Studies, Driver Training, and served as Guidance Counselor at Mattoon High School. During his retirement, he enjoyed gardening, watching the St. Louis Cardinal spring training games, taking many, many pictures as he visited more than 60 countries, and snow-birding in Florida to avoid the Illinois cold weather. Mr. Etchason was a life member of NEA, a member of First Presbyterian Church where he served as Deacon and Elder, a past master and fifty year member of Edgewood AF & AM #484, Past Worthy Patron of Edgewood OES #787, a member of the Valley of Danville Consistory, and Ansar Shrine, Springfield, IL. In lieu of flowers, if you desire, please make a donation to the Memorial Fund of the Presbyterian Church, Mattoon, IL, or Houston Hospice, Houston, TX. Please visit www.mitchell-jerdan.com or www.facebook.com/mitchelljerdanfuneralhome to light a virtual candle in his honor or share a memory with his family.

The family of H. Carl Etchason created this Life Tributes page to make it easy to share your memories.

Send flowers to the Etchason family.