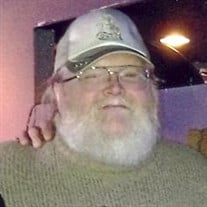 Mattoon, IL – Greggory R. “Tank” Letner, age 57, of Mattoon, IL, passed away at 3:21 a.m., Saturday, February 20, 2016, at Sarah Bush Lincoln Health Center. The funeral service in his honor will begin at 10:00 a.m., Wednesday, February 24, 2016, at Mitchell-Jerdan Funeral Home, 1200 Wabash Avenue, Mattoon, IL, 61938. Reverend Kelly Brewster, Reverend Dave Baldwin, and Reverend Steve Elder will officiate. Interment will be in Dodge Grove Cemetery, Mattoon, IL. Visitation will be held at the funeral home, Tuesday evening, from 4:00-8:00 p.m. Masonic rites will be conducted at 8:00 p.m. by the Mattoon Masonic Lodge #260. Tank was born April 24, 1958, in Mattoon, IL, the son of Wendell R. and Sara L. (Houchin) Letner. He married Doris A. Dow on November 17, 1990. He is survived by his loving wife of twenty-five years, Doris Letner of Mattoon, IL; three children: Adam Wayne Alvis and wife Jennifer of Mattoon, IL, Leah Marie Ramey and fiancé Paul of Louisville, KY, and Deacon Wendell Revere Letner of Mattoon, IL; one sister, Sally L. Letner of Mattoon, IL; and two brothers: Robert L. Ballinger and wife Sheryl of Mattoon, IL, and Ron E. Ballinger and wife Karla of Mattoon, IL. He leaves three grandchildren, Blake A. Alvis of Mattoon, IL, Connor E. Alvis of Mattoon, IL, and PJ LeGrande of Louisville, KY. He was preceded in death by his parents. Tank was the owner and operator of Bob’s East Side Package. He formerly attended the Marshall Avenue Christian Church in Mattoon, IL. Memberships included the Masonic Lodge #260 of Mattoon, IL, Shriners Ainad Temple of East St. Louis, IL, Cornbelt Shrine Club Ansar of Charleston, IL, Scottish Rite Valley of Danville, IL, founding member of the East Side Knife and Gun Club of Mattoon, IL, and former member of the Mattoon Pranksters. He was a supporter of the Big Brothers and Big Sisters program, Mattoon YMCA, and Camp New Hope. Tank was an avid fan of the LA Dodgers, the Oakland Raiders, and the Fighting Illini. He was well known for his knowledge, selection, and collection of cabernet wines, and for being brutally honest. In his free time, he could be found enjoying the wind in his face on one of his three motorcycles - a Harley Fat Boy, a Harley Electra Glide, and a Triumph. Family, motorcycles, and music, were three of his greatest loves. Memorials in his honor may be made to the organization of the donor’s choice. Please visit www.mitchell-jerdan.com or www.facebook.com/mitchelljerdanfuneralhome to light a virtual candle in his honor or share a memory with his family.

The family of Greggory "Tank" R. Letner created this Life Tributes page to make it easy to share your memories.

Send flowers to the Letner family.