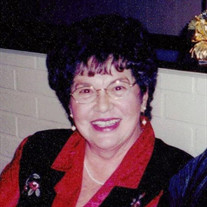 Gertrude Marie Kessler, age 87 of Mattoon, IL passed away on November 2, 2019 at Sarah Bush Lincoln Hospital Center. Gertrude’s request was to be cremated with graveside services at a later date. Mitchell-Jerdan Funeral Home, located at 1200 Wabash Avenue, Mattoon, IL 61938 is assisting the family with arrangements. Gertrude was born on December 29, 1931 the daughter of Heinrich and Theresa Rehberger in Krummau An Der Mouldau, in Bohmeerwald (Sudetenland). At the age of 14, when the war was over, she remembered how grateful her family was that they had survived and how happy they were when the American Troops had come to her hometown. At that time, she had no idea that the war had separated the Germans and the Czechs until the Czech soldiers came to the door with their guns and bayonets with orders stating if they wanted to remain German that they would need to leave. Leaving all behind and saying goodbye to their homeland, her family was deported in February 1945. They were loaded on a train with several other people, allowed to take 50 lbs. per person and had to leave everything else behind. They prayed that they would be able to stay together as a family. On their journey, dealing with frostbite and starvation they finally came to a stop in Hoechst bei Frankfurt. From there they were bused to Eschborn Im Taunus, which became their new home and where her remaining family still lives. It was there that she continued her education and became a kindergarten teacher and met the love of her life, Kurt Kessler. After dating for some time, she learned Kurt’s family was going to America. Kurt’s family came to America in July 1949. Gertrude had to be 18 years of age to go, she waited until the following January to join him. She got on the ship to America all alone on January 1, 1950. Kurt was there to greet her when the ship arrived. They settled in Mattoon, IL because that is where Kurt’s sister had married a GI from a neighboring town. They were married on February 4, 1950 and shortly after they made their American citizenship. Survivors include one son, Kenny Kessler and his wife Pam of Mattoon, IL; one daughter, Debbie Kessler of Mattoon, IL; two grandchildren, Chris and wife Amanda of Arcola, IL and Jason and wife Megan of Salem, IL; four great grandchildren: Avery, Jacey, Jordan and Brynn; two nephews, Jack Warman, Gerhard Warman and wife Judy; two sisters, Helga Rugenhagen and husband Ralf, Gerlinde Ingelfinger and husband Helmut; two brothers, Walter Rehberger, Ernst Rehberger and wife Ursula; one sister-in-law, Elke Rehlberger; plus several nephews and nieces in Germany. Gertrude was preceded in death by her husband Kurt; sister-in-law, Hilde Warman and husband Frank; sister, Hilde Labsch and husband Herbert; and brother, Herbert Rehberger. All knew Gertrude for her loving and kind ways. She was blessed with being a housewife to stay home with her children and was the best mom ever. She worked side by side in the evening helping Kurt building their new homes for the family. Gertrude and Kurt were founding members of Trinity Lutheran Church in Mattoon, IL. In the late 70’s she worked at Little Mexico making all the cheese dip, salad dressings and desserts. Gertrude was famous for her baking skills from her Black Forest torte to her Buttercream tortes. She loved her family and friends so much and she loved her flowers. She also leaves behind her special friends, Liesel, Marianne and Susi, who helped her in so many ways after Kurt Passed. Through the trauma she endured in her early years, she rose above and showed love and kindness to all. Memorials in her honor may be made to Camp New Hope, 1364 County RD 100 E, Neoga, IL 62447 or Mattoon Community Food Center, 600 Moultrie Avenue, Mattoon, IL 61938 Please visit www.mitchell-jerdan.com or www.facebook.com/mitchelljerdanfuneralhome to light a virtual candle in her honor.

The family of Gertrude Marie Kessler created this Life Tributes page to make it easy to share your memories.

Gertrude Marie Kessler, age 87 of Mattoon, IL passed away on...

Send flowers to the Kessler family.