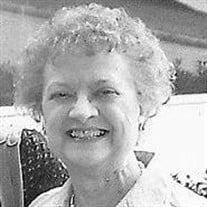 Mattoon, IL - Geraldine Faye Perry Shannon died peacefully at her home on Thursday, October 29th, 2015. She had survived almost two years after being diagnosed with breast cancer. She was an inspiration to all who met her during this time and throughout her life. Since Geraldine (Geri) was an avid genealogist, her family will do their best to write an obituary that honors both her research interests and most importantly, her life. She was born on July 20th, 1928 in Charleston, IL to Clyde Perry and Wanda (Cross) Perry. Her sister was born two years later, and the family moved to Mattoon around 1932. Her mother’s family homesteaded in Cumberland and Coles Counties. She grew up with scores of cousins, aunts, and uncles which made for a loving, happy childhood. Geri sang before she spoke. Despite being very poor, her mother made sure Geri had piano lessons. After graduating from Mattoon High School in 1946, she studied voice in Chicago. Homesick, she returned to Mattoon a year later and became certified for administrative work. She could type 140 words per minute at the height of her career. The musician in her could not be quelled. In 1948, she formed a trio called “The Carolaires” with two other friends. They sang at Red Cross shows, private parties, the Lion’s Club, and Chanute AFB. This led to a radio show on WLBH in Mattoon that they did until her marriage to LeRoy Shannon on Sep 24, 1954, in Mattoon. She continued to perform solos and in choir throughout her life. Her alto voice was so lovely that one person remarked to LeRoy that her voice made her “one of the most beautiful women he had ever met”. For a young woman homesick for Mattoon, her life with Roy led her across the US and as far away as China. They had three children, each born in a different state: Matthew, Molly and Maureen. Roy and Geri were a team, a perfect combination of straight man and comic. Geri was the straight man to Roy’s comedic antics. They demonstrated to their children the importance of respect and value of their partner. When Geri desired to begin college for a degree in education, Roy made sure she had the support to do so. She graduated from the University of Iowa with a B.S. in Education in 1979. During this time, not only did she make the Dean’s list but she was also co-chair of the Republican Party headquarters in Iowa City, IA during Ronald Reagan’s first bid for the Presidency. She substitute taught for several years. Religion was a big part of Geri and Roy’s lives. In Feb 1959, they were baptized into the Church of Jesus Christ of Latter-Day Saints. She was part of the team when he was Branch President in all the small towns in which they lived. After his death, she served as a missionary in the LDS Chicago Temple and in Salt Lake City. She was often the newsletter editor for the Relief Society, a role she held until her death this month. Geri lived with her son and his family for many years. Her travels continued with them to include a brief time living in the Republic of Georgia. Eventually, she became homesick for Mattoon and moved back to her cousins and a wonderful church family. Her sister Dolores returned as well with the two of them sharing a home for a few years. Always close, the two were then inseparable. Cousins and friends quickly learned that to play a “Perry” sister in any card or board game was to be on the losing end. Many happy times were to be had with cousins and friends playing games, having dinners together, and shopping. Geri leaves behind her three children, their spouses and their families. They include Matthew and Sarah (Havighurst) Shannon and their children: Bryce Jacobs-Shannon, Elizabeth, Samuel (wife Heather; children Alexis and Cole), Meghan, and Phoebe all of Atlanta GA, and Joseph (wife Mary (Marsden)), of Rexburg, Idaho. Molly and Stephen Thompson and their children, Michael and Stephanie (husband Edward Powell; children Shayla Cameron-Powell and Holden) of Anchorage, Alaska, Maureen and Timothy Hovermale of Tennessee and their children: Amber (husband Alex Hieatt and their son, Christopher (C.J.)) of Frankfurt, KY, Timothy JR (his girlfriend Jaime Morissette), and Blake Hovermale of Lousiville, KY. Geri had a wonderful circle of friends and family that made her last few months peaceful and enjoyable. The family would like to thank them all but there is not enough room for such a long list. A few folks we must not omit: Her sister, Dolores Liberto, for years of being her closest, dearest friend, confident and partner in card crimes; cousins Janet Rich, Lyla Branson, Lowell Cutright, and George and Dorothy Cutright for years of happy memories, lunches filled with laughter, card games, and handyman skills; Mary Helen Mertz and the Relief Society from the LDS church in Mattoon for demonstrating what the name truly means. Each and everyone listed (and many more) made Geri’s last years in Mattoon a joy so she could leave us peacefully to be with the love of her life again. The funeral will be held Saturday, November 7 at 10 a.m. at the LDS Church in Mattoon with interment at Janesville Cemetery. Mitchell-Jerdan Funeral Home, located at 1200 Wabash Avenue, Mattoon, IL 61938, is assisting the family with arrangements. Please visit www.mitchell-jerdan.com or www.facebook.com/mitchelljerdanfuneralhome to light a virtual candle in her honor or share a memory with her family.

Mattoon, IL - Geraldine Faye Perry Shannon died peacefully at her home on Thursday, October 29th, 2015. She had survived almost two years after being diagnosed with breast cancer. She was an inspiration to all who met her during this time and... View Obituary & Service Information

The family of Geraldine Faye (Perry) Shannon created this Life Tributes page to make it easy to share your memories.