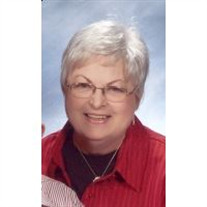 Mattoon, IL-Geraldine 'Jerry' Louise Lacey, age 70, of Mattoon, IL, passed away at 1:25 a.m., Thursday, May 27, 2010 at Sarah Bush Lincoln Health Center.\r\nThe funeral service in her honor will begin at 10:00 a.m., Wednesday, June 2, 2010 at Mitchell-Jerdan Funeral Home, 1200 Wabash Avenue, Mattoon, IL, 61938 with Pastor Kevin Wolfe officiating. Interment will be in Resthaven Memorial Gardens. Visitation will be Tuesday evening from 5:00-7:00 p.m., also at the funeral home. \r\nMrs. Lacey was born July 27, 1939, in Westfield, IL, the daughter of Kenneth and Kathryn (Fasig) Hampton. She married Robert Lacey on June 3, 1961 in Mattoon, IL. He passed away May 14, 2008. She is survived by their daughter, Donna Lacey of Mattoon, IL. In addition to her husband, she was preceded in death by her parents; one brother, Kenneth H. Hampton, Jr.; and a son, Kenneth J. Lacey. \r\nMrs. Lacey was a member of the Broadway Christian Church and had worked for ICTC. She was quite an artist and enjoyed painting murals, furniture, and church banners. She served as secretary and treasury of the Highlighters Sunday school class and was a member of the Paradise Bible study. She also enjoyed hosting Bible studies and prayer groups in her home. Her favorite pastimes included shopping with an elite group of women, and having lunch or coffee with friends.\r\nIn lieu of flowers, memorials may be made to the Highlighters Class, Broadway Christian Church, 1205 S. 9th St., Mattoon, IL 61938. \r\nPlease visit www.mitchell-jerdan.com to light a virtual candle or share a memory with the family.\r\n

The family of Geraldine "Jerry" Lacey created this Life Tributes page to make it easy to share your memories.

Send flowers to the Lacey family.