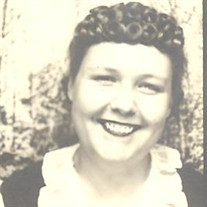 Mattoon, IL – Geraldine “Jean” Chism, age 94, of Mattoon, IL, passed away at 6:45 p.m., Friday, April 28, 2017, at Douglas Nursing and Rehabilitation Center in Mattoon, IL. The funeral service in her honor will begin at 1:00 p.m., Tuesday, May 2, 2017, at Mitchell-Jerdan Funeral Home, 1200 Wabash Avenue, Mattoon, IL 61938 with Reverend Dennis Strawn officiating . Burial will in Dodge Grove Cemetery, Mattoon, IL. A visitation will be held from 12:00 p.m. until time of service on Tuesday. Born March 12, 1923, in Yale, IL Jean was the daughter of Cleo C. and Mary E. (Lawrence) Lacey. Other ancestors include Ray and Bonnie (Prentice) Chapman. She married Orrison B.“O.B.” Chism on February 20, 1949, in Mattoon, IL., he preceded her in death on May 10, 1989. Survivors include her daughter Patricia Sue Chism of Mattoon. Besides her husband, Orrison “O.B.” Chism, she was preceded in death by one daughter, Janet K. Chism; two sons, Donald E. Chism, and Stephen A. Chism; and several brothers and sisters. Geraldine was a former employee of Okaw Building and Loan as a bookkeeper until her marriage in 1949, and then she managed the books for the family farm. She was a member of the First Baptist Church in Mattoon, IL. She was well known for her outgoing friendliness and good will. Her strong character made her a respected and honest advisor to her cherished family members. Besides her love for her family, she enjoyed cooking a good meal. She will be sadly missed by her daughter Patricia and by all those whose lives she touched. Please visit www.mitchell-jerdan.com or www.facebook.com/mitchelljerdanfuneralhome to light a virtual candle in her honor or share a memory with her family.

The family of Geraldine "Jean" Chism created this Life Tributes page to make it easy to share your memories.

Send flowers to the Chism family.