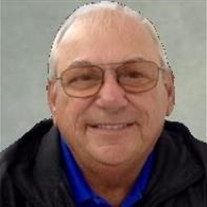 Mattoon, IL – George Robarge, Jr., age 65, of Mattoon, IL, passed away at 5:10 p.m., Tuesday, November 10, 2015, at Douglas Rehabilitation and Care Center. The funeral service in his honor will begin at 10:00 a.m., Saturday, November 14, 2015, at Mitchell-Jerdan Funeral Home, 1200 Wabash Avenue, Mattoon, IL 61938. Pastor Dennis Strawn will officiate. Visitation will be held Friday evening from 5-7 p.m. at the funeral home. Born December 4, 1949, in Berwyn, IL, George was the son of George and Dolly (Stay) Robarge. He married Lynn Oliver on May 13, 1970 at the Broadway Christian Church in Mattoon, IL. She preceded him in death in 1992. Survivors include his mother, Dolly Stull of Oak Creek, WI; his father and step-mother, George and Velma Robarge of York, PA; one daughter, Tracy Thompson and husband Mike of Apple Valley, MN; one son, George Robarge, III of Mattoon, IL; two grandsons, Lucas and Patrick Thompson of Apple Valley, Minnesota; three brothers, Thomas Robarge and wife Amanda of Franklin, WI, David Robarge and wife Lori of Apopka, FL, and John Robarge and wife Natalie of Oak Creek, WI; two sisters, Dolly Larson of Muskego, WI, and Cathy Wild and husband Dennis of Franklin, WI. He also leaves several nieces, nephews, great-nieces, and great-nephews. He was preceded in death by his wife, Lynn; sister, Laura Pollack; step-father, Harold Stull; a brother-in-law, Roy Larson; and a nephew, Frank Pollack. George retired from Sims Products in 2015 after many years of service. He was also a previous employee of Young Radiator in Mattoon, IL. George valued time spent with his family and trips to casinos with his mom and sister were among his favorites. Golfing was another of his favorite pastimes and he cherished the many golfing trips he took with his buddies. George was a member of the Eagles and Moose Lodge of Mattoon. Memorials in his honor may be made to the family in care of Mitchell-Jerdan Funeral Home, 1200 Wabash Avenue, Mattoon, IL 61938. Please visit www.mitchell-jerdan.com or www.facebook.com/mitchelljerdanfuneralhome to light a virtual candle in his honor or share a memory with his family.

The family of George Robarge Jr. created this Life Tributes page to make it easy to share your memories.

Send flowers to the Robarge family.