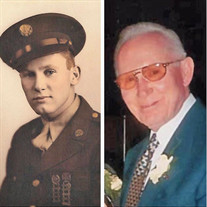 George E. McMichaels, age 94 of Mattoon, IL peacefully passed away Friday, February 1, 2019 at 11:38 P.M. at Heartland Christian Village in Neoga, IL. A funeral service in his honor will be held at 10:00 A.M., Friday, February 8, 2019 at the First Baptist Church, 1804 S. 9th Street, Mattoon, IL 61938; Reverend Stephanie Johanpeter will officiate. Burial will immediately follow in Dodge Grove Cemetery in Mattoon, IL. Military Rites will be conducted at the cemetery by the Mattoon VFW Post 4325. A visitation will be held Thursday evening, February 7, 2019 from 5:00 P.M.-7:00 P.M. at Mitchell-Jerdan Funeral Home, 1200 Wabash Avenue, Mattoon, IL. George was born November 24, 1924 in Mattoon, IL to parents Carl and Ethel (Grubb) McMichaels. George married Thelma Brown on February 10, 1945. George is preceded in death by his loving wife, Thelma McMichaels, after seventy-one years of marriage. He is survived by their three children: Connie Cuccio and husband Tony of St. Charles, MO, Barbara Ealy and husband John of Boardman, OH and Brian McMichaels and wife Lisa of Mattoon, IL; eleven grandchildren: Monica Fick, Chrissy Bajardi, Nick Cuccio, Gina Ruzicka, Maria Mousdicas, Allison Pearce, Travis Ealy, Amanda Cohol, Miranda McMichaels, Aubrie McMichaels, and Emily Strader; and twenty-two great grandchildren: Zachary, Kayla, Hannah, Camryn, Jack, Aidan, Callie, Joe, Keenan, Annie, Miya, Makayla, Maggie, Nate, Kyle, Connor, Liam, Mason, Lucy, Ava, Liliana and Luka; and one special niece, Sharon Howard. George is preceded in death by one brother, Donald McMichaels; one sister, Ruth Roling; and great grandchildren, Avery and Valentina. George honorably served his country in the U.S. Army in WWII. He served overseas in North Africa and Europe. Among various medals and ribbons, he received the Bronze Star Medal and Combat Infantry Badge. George graduated from Mattoon High School and later from Utterback Business College. He worked at General Oil Tool and Equipment Company and ACME Gas and Petroleum Company in Mattoon in the accounting departments. He then accepted a position as a Civil Service Auditor with the State Department of Revenue. He proceeded through the ranks, reaching the position of Manager of the Audit Division of the State of Illinois, and out of state locations in New York, California, Texas, Ohio, and Indiana. He retired with thirty-five years of service. George was an active member of Faith United Methodist Church in Mattoon, IL for sixty-two years. He later became a member of the First Baptist Church in Mattoon, IL. He was a charter and life member of Veterans Foreign Wars (VFW) post 4325 in Mattoon, IL and served many years on the VFW Funeral Home Guard. He also was a member of American Legion Post 88. George dedicated his time to volunteering with Mattoon Community Food Service for fifteen years, serving as an interviewer, Board of Directors, and one year as Board Chairman. He was a volunteer for hospice and served as Division Leader of United Way. George was a person of faith and lived life serving others. He loved his family greatly and his memory will live on through them. The family would like to express their gratitude to the loving and caring staff at Heartland Christian Village. Memorials in his honor may be made to the First Baptist Church or the Society of St. Vincent DePaul, 320 North 21st Street, Mattoon, IL 61938. Please visit www.mitchelljerdan.com or www.facebook.com/mitchelljerdanfuneral to share a memory with the family or light a virtual candle in his honor.

The family of George E. McMichaels created this Life Tributes page to make it easy to share your memories.

Send flowers to the McMichaels family.