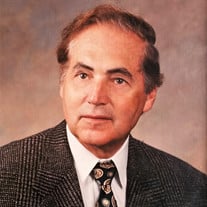 Gene F. Hoots, age 90, of Mattoon, IL, passed away at 2:04 A.M., Saturday, December 2, 2017, at Odd Fellow-Rebekah Home. The funeral service in his honor will be held at 12:00 P.M., Tuesday, December 5, 2017, at Mitchell-Jerdan Funeral Home, located at 1200 Wabash Avenue, Mattoon, IL 61938, with Reverend Mike Smith officiating. Burial will follow at Humboldt Township Cemetery in Humboldt, IL. Visitation will be from 9:00 A.M. until the time of service begins at the funeral home. Gene was born Aug 28, 1927, on a farm near Humboldt, IL, the son of Roy and Francis (Paullin) Hoots. Francis tragically passed away giving birth to a baby girl in the dead of winter at the start of the Great Depression. Roy remarried Edna “Ada” Kagay several years later. Gene married Betty Breningmeyer on March 1, 1953 in Mattoon, IL. He is survived by the love of his life, Betty Hoots; two children, son Brent F. Hoots and wife Jackie Studer of Falmouth, ME, and daughter Debra L. McNeely of Mattoon, IL; five grandchildren, Jack Hoots, Katie Hoots, Kristi L. Lamana and husband Phil, Andy McNeely and wife Janet, Ryan McNeely and wife Kristen; and one brother, Dale Hoots and wife Marilyn of Mattoon, IL. He is preceded in death by his parents and one sister. Gene grew up in Humboldt, IL, helping his parents work the farm and playing with his best friend and brother, Dale. Gene and Dale were outstanding athletes in basketball and softball. Gene was awarded an athletic scholarship to Eastern Illinois University. However, after one year, Gene left EIU to return to the family farm and work. Eventually, he purchased and operated a small ice cream stand from his uncle Bill Paullin. During that time, he fell in love and married Betty. Gene and Betty worked side-by-side running the ice cream shop, and then expanded the operation to include hamburgers. Betty said that “Burger King” would be a great name for their restaurant and it became Mattoon’s favorite restaurant, still to this day. The two worked hard, long hours to build a successful restaurant and eventually expanded their business and at one point operated four different successful restaurants in the Mattoon area. Gene was a member and President of the Mattoon Chamber of Commerce, on the board and served as the Chairman of the Board of Okaw Savings & Loan, on the board and served as President of the Mattoon Golf & Country Club. He was also on the Mattoon Tourism Board and participated in many other community organizations. Gene was actively involved in the Central Community Church of Mattoon for many years, and later a member of the First United Methodist Church of Mattoon. Gene was also actively involved with music, starting at a very early age. As a teen, he started a band that played at dances and other social events. Although music eventually took a back seat to spending most of his time focused on the restaurant business and helping his father with farming, music was always an important part of his life. Later in life, Gene returned to music, writing the music and lyrics for several CD’s, with one of his songs making it to the Bill Board top 30 Country Music Charts. Throughout his life, Gene was an active athlete, playing handball, racquetball, and golf. Gene was also an avid Contract Bridge player. Bridge and golf became important pursuits that allowed Gene and his wife, Betty, to be active members of the local golf community and also a golf community at Riverwood, FL, where they spent a great deal of their time in the winters later in life. Gene also wrote a book about succeeding in business and a book about his growing up on the farm - entitled Dale and Me - and the close relationship he had is entire life with his brother Dale. Gene was a devoted husband, father and grandfather, actively involved with his family and the raising of his two children, Debbie and Brent, and in later life spending time with his grandchildren Kristi, Andy, Ryan, Jack and Katie. Gene will be greatly missed by his family and always remembered. Please visit www.mitchell-jerdan.com or www.facebook.com/mitchelljerdanfuneralhome to light a virtual candle in his honor or share a memory with the family.

The family of Gene F. Hoots created this Life Tributes page to make it easy to share your memories.

Send flowers to the Hoots family.