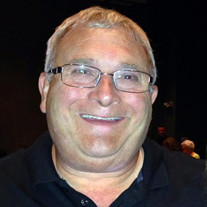 Lerna, IL – Gary R. Jones, age 65, of Lerna, IL, passed away at his home on February 11, 2017. A celebration of life in his honor will begin at 10:00 a.m., Friday, February 17, 2017, at the Fields Church, 900 DeWitt Avenue East, Mattoon, IL 61938. Pastor Travis Spencer and Pastor Ron Heitman will officiate. Interment will be in Rest Haven Memorial Gardens. Visitation will be held Thursday evening from 5:00-8:00 p.m., at Mitchell-Jerdan Funeral Home, 1200 Wabash Avenue, Mattoon, IL 61938. An additional service will be held at Evangel Church in Hanover Park, IL, at a later date. Born June 28, 1951, in Mattoon, IL, Gary was the son of Walter L. and Martha M. Jones. He married Connie French on June 20, 1970. He is survived by Connie, his loving wife of 46 years; their children, Kendra Jones of Itasca, IL and Kari Jones of Lerna, IL; one sister, Cindy Williams (Jack); two brothers-in-law, Mike Weber (Sandy)of Mechanicsburg PA and Steve (Jan) French of Windsor, IL; nephews, Eric Williams (Erin), Scott Williams, Chad (Jillian) Weber, Chris (Dee) Weber, Jeffrey (Kelsey) Weber, and Douglas French; one niece, Heather Weber; as well as many other family members and friends. He will also be missed by Punkin, Boo, The Mother Hens, and his pet donkey, Jack. Gary served our country with the United States Army from 1969-1972, and as a result, battled many health issues arising from exposure to Agent Orange. After spending more than 40 years in the automotive manufacturing industry, Gary retired from his position of President of FIC America, in Carol Stream, IL, in 2016. He was known for his love of body-building, rock climbing, hiking, and repelling. He loved the outdoors and felt he was closest to God when surrounded by His Creation. He was passionate about his love of God, his family, and his friends. Memorials in his honor may be made to the iHeart Veterans. Please visit www.mitchell-jerdan.com or www.facebook.com/mitchelljerdanfuneralhome to light a virtual candle in his honor or share a memory with his family.

The family of Gary R. Jones created this Life Tributes page to make it easy to share your memories.

Send flowers to the Jones family.