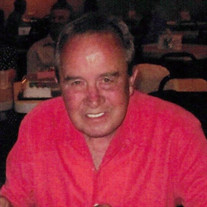 Gail L. Helton, age 77 of Mattoon, IL passed away on March 30,2020 at Sarah Bush Lincoln Health Center in Mattoon, IL A funeral service in his honor will be at 1:00 PM, Wednesday, April 15, 2020 at Mitchell-Jerdan Funeral Home, 1200 Wabash Avenue, Mattoon, IL 61938; Pastor Travis Spencer will officiate. Burial will immediately follow at Resthaven Memorial Gardens. A visitation will be held from 11:00 AM until the time of service at the funeral home. Gail was born on August 18, 1942 in Xenia, OH the son of the late Donald T. and Quinnamae (McNamer) Helton. He married Ruth Ann Didway on June 10, 1962 in Charleston, IL. He is survived by his wife, Ruth Ann of Mattoon, IL; two daughters, Michelle Renee Wilson (Jeff) of Arizona City, AZ, Melody Ann Rager (Jeremy) of Stillwater, OK; grandchildren: Jori Leigh Bielski (Bart) of Casa Grande, AZ, Paris Simone Towner (Jacob Spaulding) of Tulsa, OK, Jesse Marie White and Blake Allen White of Stillwater, OK; step-grandson, Jeremiah Wilson; great-grandson, Gabriel Jeffrey Bielski of Casa Grande, AZ; two brothers, Larry D. Helton (Judy) of Mobile, AL, Ricky J. Helton of Mattoon, IL; one sister-in-law, Ginny L. Gochanour (Bob) of Charleston, IL; and one brother-in-law, Larry A. Didway (Jane) of Galesburg, IL. Gail was a baptized member of Windsor Christian Church, a high school graduate of Windsor High School, and also graduated from Utterbacks Business College in Mattoon, IL. He served as President for the International Federation of Musicians Local #224 for three years and promoted (TEMPO) live music. He retired from Hamburg-Union Distributing in Champaign, IL after thirty-one years as an alcohol beverage salesman. He was formerly employed at 1st National Bank, Rasmussen Chevrolet and KC Summers Auto Group in Mattoon, IL, he also sold life insurance. He was a former member of several service clubs in the area. At a young age, Gail had a passion for music, was a natural percussionist and perfected the shuffle beat. In the 1960’s, Gail was the leader and drummer for rhythm and blues band, The Artistics, for well over a decade. Highlights of The Artistics were Channel 3’s At The Hop, Marty’s Dance Party in Decatur, IL, winning the State Fair Battle of The Bands, recording in Nashville, TN and the ChaCha Studios in Chicago, IL, USO Tour to Thule, Greenland, and opening act for well-known groups. Gail was a former member of Travelers and Sounder the show band, traveling the United States. He was a member of Chuck White jazz group, Bill Hall Orchestra, Galewinds, Decades and Plain Jane. Gail’s other interest were fishing and motorcycle riding, but the love and relationships he enjoyed with his two daughters, grandchildren, and great-grandson were most beautiful. He will be missed more than words can say. Gail made an impact on the musical scene and lasting legacy as a drummer extraordinaire, but those who knew him best called him Dad or PaPaw. Please visit www.mitchelljerdan.com or www.facebook.com/mitchelljerdanfuneralhome to light a virtual candle in his honor or share a memory with the family.

The family of Gail L. Helton created this Life Tributes page to make it easy to share your memories.

Send flowers to the Helton family.