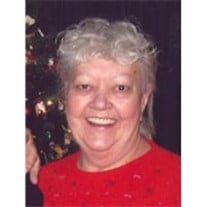 Freda Rae Webb\r\nMattoon, IL-Freda R. Webb, age 74, of Mattoon, IL, passed away at 11:40 a.m., Monday, August 30, 2010, at St. Anthony Memorial Hospital in Effingham, IL.\r\nThe funeral service in her honor will begin at 10:00 a.m., Thursday, September 2, 2010, at Mitchell-Jerdan Funeral Home, 1200 Wabash Avenue, Mattoon, IL, 61938, with Reverend Dr. John Calio officiating. Interment will be in Dodge Grove Cemetery. Visitation will be held Wednesday evening from 5:00-7:00 p.m. at the funeral home.\r\nMrs. Webb was born June 2, 1936, in Charleston, IL, the daughter of John and Maxine (Hite) McCord. She married Kenneth Webb in Bloomington, IL in 1966. He survives. Other survivors include their daughter, Jody Conklin of Willow Brook, IL; a sister, Betty Wilson of Charleston, IL; three grandchildren, Abby, Adam, and Donovan Conklin; and several nieces and nephews. She was preceded in death by her parents; one brother, Bill McCord; and two sisters, Mary Oakley and Francis Metzler.\r\nMrs. Webb had retired from General Electric. She was an avid bowler and a 50 year member of the Mattoon Bowling Association. Other memberships included the Eagles Auxiliary, Moose Auxiliary, and American Legion Auxiliary. Mrs. Webb was named to the Mattoon City Hall of Fame for her bowling. She also enjoyed golfing at the Rogala Golf Course. However, she enjoyed nothing more than spending time with family. \r\nPlease visit www.mitchell-jerdan.com to light a candle in her honor or share a memory with her family.\r\n

The family of Freda Rae Webb created this Life Tributes page to make it easy to share your memories.