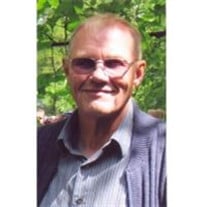 Francis 'Huck' Huckaba\r\n\r\nHumboldt, IL-Francis 'Huck' Huckaba, age 78, of Humboldt, IL, passed away at Carle Foundation Hospital in Urbana, IL, at 8:03 p.m., Monday, September 3, 2012. \r\n\r\nThe funeral service in his honor will begin at 3:00 p.m., Friday, September 7, 2012 at Mitchell-Jerdan Funeral Home, 1200 Wabash Avenue, Mattoon, IL , 61938. Reverend Mark Jordan will officiate. Interment will be in Humboldt Cemetery, Humboldt, IL. Visitation will be held Thursday evening from 5:00-7:00 p.m., at the funeral home. Military rites will be conducted by the Mattoon VFW Post 4325.\r\n \r\nBorn July 23, 1934, in Mattoon, IL, Francis was the son of Russell and Beulah (Eveland) Huckaba. He married Sandra Sue Maxedon on July 3, 1960. He is survived by Sandra, his loving wife of 52 years; his children, James P. Huckaba and wife Jeri of Mattoon, IL; and Amy Lynn Fulk and husband Robert of San Antonio, TX; a brother, Clarence Huckaba of Youngstown, OH; a sister, Barbara Martin and husband Jack of Mattoon, IL; three grandchildren, Jai Huckaba of Mattoon, IL, India Fulk of San Antonio, TX, and Caleb Fulk of San Antonio, TX; and several nieces and nephews. He was preceded in death by his parents and a brother, Edward Huckaba.\r\n \r\nMr. Huckaba served our country with the United States Army. He had also served as a minister and was devoted to reading his Bible. He was a hard worker and supported his family by working as a laborer at Hulman's, Associated Springs, and Trailmobile. He later delivered cars for Pilson's and Mooney's. He was a baseball fan and, in his younger years, had coached his son's and daughter's teams. He enjoyed working in his yard and on his home, puzzles, and travelling; however, spending time with his family was his favorite way to pass the day. \r\n\r\nMemorials in his honor may be made to the charitable organization of the donor's choice. \r\n\r\nPlease visit www.mitchell-jerdan.com to light a virtual candle in his honor or share a memory with his family.\r\n

The family of Francis 'Huck' Huckaba created this Life Tributes page to make it easy to share your memories.

Send flowers to the Huckaba family.