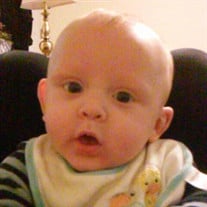 The memorial tribute video will be posted when available, please check back. Mattoon, IL – Everette Vince Cushman, precious five month old son of Thad Allen Cushman and Angelic Marie Jones, and beloved twin brother of Allen Wayne Cushman, passed away at 6:30 p.m., Tuesday, January 26, 2016, at Carle Foundation Hospital in Urbana, IL. The funeral service in his honor will begin at 11:00 a.m., Tuesday, February 2, 2016, at Mitchell-Jerdan Funeral Home, 1200 Wabash Avenue, Mattoon, IL 61938. Reverend Gary Parrill will officiate. Interment will follow in Neoga Memorial Cemetery. Visitation will be held at the funeral home from 10:00 a.m. until the service begins. Everette was born August 17, 2015, at Sarah Bush Lincoln Health Center in Mattoon, IL. In addition to his parents and twin brother, he is survived by his maternal grandparents, George and Debrah Jones of Mattoon, IL; and paternal grandparents, Rachael Cushman and Eric Bertolet of Mattoon, IL; paternal great-grandmothers, Karen Rogers of Mattoon, IL, and Pam Cushman of Mattoon, IL; great-great grandmothers, Dorothy Trame of Mattoon, IL, and Catherine Ervin of Mattoon, IL; four uncles, Johnathan Jones of Mattoon, IL, Brandon Longbien of San Diego, CA, Chris Jones of Phoenix, AZ, and Nathan Bennett of Joliet, IL; and two aunts, Cholly Cushman, and Tytia Cushman, both of Mattoon, IL. He was preceded in death by his paternal grandfather, Chad Cushman, and paternal great-grandfather, Ronald Goleman. Everette was a handsome, wonderful, and strong little soul who was more loved and cherished than he will ever know. He was the definition of a happy bouncing baby boy who loved to play in his bouncy horse and listen to “The Gummy Bear Song” that his Uncle Johnathan played for him. In his short life, not only did Everette brighten this world with his adorable smile and happy personality, he was also a hero. He left this Earthly world much too soon, but in doing so, gave the gift of life to several other children. Although Allen will undoubtedly miss his “little brother” dearly, he will always have the peace of knowing he was a hero. Memorials in his honor may be made to the family in care of Mitchell-Jerdan Funeral Home, 1200 Wabash Avenue, Mattoon, IL 61938. Please visit www.mitchell-jerdan.com or www.facebook.com/mitchelljerdanfuneralhome to light a virtual candle in his honor and view the memorial tribute.

The family of Everette Vince Cushman created this Life Tributes page to make it easy to share your memories.

The memorial tribute video will be posted when available, please...

Send flowers to the Cushman family.