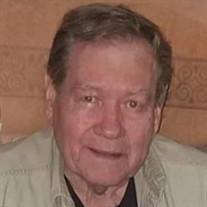 Everett “EB” William Bennett, age 83, of Humboldt, IL passed away at 9:14 PM Tuesday, August 11, 2020 at Carle Foundation Hospital, Urbana, IL. A funeral service in his honor will be held at 7:00 PM on Tuesday, August 18, 2020 at Mitchell-Jerdan Funeral Home located at 1200 Wabash Avenue, Mattoon, IL. Pastor Travis Spencer will officiate. The visitation will be held from 5:00 PM until the time of the service at Mitchell-Jerdan Funeral Home. Everett was born on February 10, 1937 in Humboldt, IL the son of the late Hugh and Irma (Daily) Bennett. He is survived by one daughter, Lori Daniels of Shelbyville, IL; one brother, Don Bennett of Bushnell, FL; two grandchildren, Brian Fuller, and Trisha Keith of Mattoon, IL; and six great-grandchildren, Whitney, and Tanner Keith, Pierce Boyer, Carmen, Brooklyn, and Bradley Fuller of Mattoon, IL. He was preceded in death by one brother, David Bennett. Everett worked at Illinois Consolidated Telephone Company in Mattoon, IL as a network technician where he retired after several years of employment. Through the course of his life he held many memberships including: Moose Lodge in Mattoon, IL; Eagles Club in Mattoon, IL; American Legion in Mattoon, IL; and Grand Lodge of Illinois Independent Order of Odd Fellows, Mattoon, IL. Everett was a quiet man with a gentle spirit who embraced his solitude. His family would lovingly refer to him as a hermit. During his leisure, Everett enjoyed gardening, fishing, riding his motorcycle and collecting old coins. He had an appreciation and admiration for antique and vintage cars. However, Everett’s greatest joy in life was his family. He anticipated family gatherings and cherished every moment spent with his loved ones. He will be greatly missed and the memories he created will live on. Please visit www.mitchell-jerdan.com or www.facebook.com/mitchelljerdanfuneralhome to light a virtual candle in his honor or share a memory with the family.

The family of Everett "EB" William Bennett created this Life Tributes page to make it easy to share your memories.