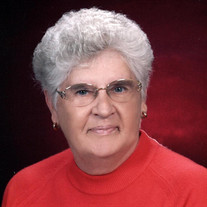 Evelyn Jean Washburn, age 82 of Mattoon, IL passed away at 12:25 PM, Wednesday, October 16, 2019 at Odd-Fellow Rebekah Home in Mattoon, IL A funeral service in her honor will be held at noon, Monday, October 21, 2019 at Mitchell-Jerdan Funeral Home, 1200 Wabash Avenue, Mattoon, IL; Pastor Steve Morgan will officiate. A committal service will immediately follow in Dodge Grove Cemetery. A visitation will be from 10:00 AM until the time of service at the funeral home. Evelyn was born on March 9, 1937 in Lerna, IL the daughter of the late William M. and Maude O. (Brandon) Goad. She married Robert E. Washburn in Neoga, IL on March 16, 1958; he preceded her in death on July 13, 2013. She is survived by her two children; daughter, Deborah A. Davis and husband Darrel of Windsor, IL, son, Rodney E. Washburn and wife Michelle of New Baden, IL; four grandchildren, Timothy Davis and wife Christine of Le Roy, IL, Derek Davis and wife Brittany of Mattoon, IL, Rachel Washburn of Mattoon, IL, Megan Washburn of O’Fallon, IL; six great-grandchildren, Alyssa, Evelyn, Destiny, Colby, Brynlee, and Briggs; one brother, William Goad and wife Doris of Mattoon, IL, and one sister, Cleo True of Mattoon, IL. She is preceded in death by her son, Ronald Washburn, brother Claudius Goad, and sister Clarice Harrington. Evelyn was a former employee of General Electric and later became a private in-home care provider. She was a member of the First Christian Church in Mattoon, IL, where she also served as a deaconess. Evelyn enjoyed tending to her lawn and garden but her favorite time was spent with her children and grandchildren. She was greatly loved and will be fondly remembered. Memorials in Evelyn’s honor may be made to Odd-Fellow Rebakah Home, 201 Lafayette, Mattoon, IL 61938 or Lincolnland Hopsice of Sarah Bush Lincoln, 2004 Health Center Drive, Mattoon, IL 61938. Please visit www.mitchelljerdan.com or www.faceook.com/mitchelljerdanfuneralhome to light a virtual candle in her honor or share a memory with the family.

Evelyn Jean Washburn, age 82 of Mattoon, IL passed away at 12:25 PM, Wednesday, October 16, 2019 at Odd-Fellow Rebekah Home in Mattoon, IL A funeral service in her honor will be held at noon, Monday, October 21, 2019 at Mitchell-Jerdan Funeral... View Obituary & Service Information

The family of Evelyn Jean Washburn created this Life Tributes page to make it easy to share your memories.

Send flowers to the Washburn family.