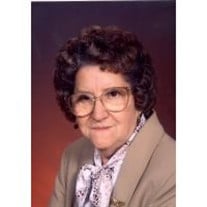 Evelyn Mae Elder, age 84, of Mattoon, formerly of Cooks Mills, passed away at 5:05 p.m., Tuesday, April 22, 2008 at Sarah Bush Lincoln Health Care Center. \r\n\r\nThe funeral service in her honor will begin at 11:00 a.m., Friday, April 25, 2008 at Mitchell-Jerdan Funeral Home with Reverend Douglas Weisel officiating. Interment will be in Pleasant Grove Cemetery, Cooks Mills. Visitation will be held at the funeral home from 10:00 a.m. until service time on Friday. \r\n\r\nMrs. Elder was born in Cooks Mills, Illinois, on October 28, 1923, the daughter of Emory and Tressie (Johnson) Morgan. She married Robert Elder who passed away June 7, 1969. She is survived by four children, Lila Rose Weisel of Baxley, Georgia, Robert Edward Elder of Cooks Mills, Illinois, Brenda O'dell and husband Wayne of Cooks Mills, Kathy Cougill and husband Larry of Cooks Mills, and Michael Elder and wife Debbie of Humboldt; and a brother, Edward Morgan of Charleston, Illinois. She leaves fifteen grandchildren, twenty-one great grandchildren, and one great-great grandchild. In addition to her husband, she was preceded in death by two sisters.\r\n\r\nMrs. Elder was a member of the Pleasant Grove Baptist Church and a former employee of the Mattoon Garment Factory. She enjoyed sewing, gardening, cooking, and canning, however, she treasured time spent with her family more than anything.\r\n\r\nMemorials may be made to the Douglas Rehabilitation and Care Center, 3516 Powell Lane, Mattoon, IL 61938.\r\n \r\nPlease visit www.mitchell-jerdan.com to light a virtual candle or share a memory with the family.

The family of Evelyn Mae Elder created this Life Tributes page to make it easy to share your memories.

Send flowers to the Elder family.