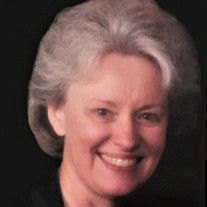 On Tuesday, February 16, 2021, our dear Evangeline Rosine Rodenbush passed peacefully from this life into the loving arms of her Savior at 2:05 a.m. at her home in Indianapolis, Indiana. Her devoted husband Rev. Robert K. Rodenbush and her loving son Rev. Robert L. (Rob) Rodenbush and daughter-in-law Jaye Mooney Rodenbush were at her side. Evangeline was born on April 14, 1943 in Decatur, Illinois to Rev. Ezra LeRoy Simpkins and Hilda Froese Simpkins. Evangeline’s father was a United Pentecostal Church International (UPCI) Pastor and Presbyter in the Illinois District, leading churches in Waynesville, Cobden, and Carbondale. Evangeline always wanted to be a preacher’s wife and worked hard in her father’s church learning to play the accordion and the piano, and serving in Sunday School, drama, and many other ministries. In 1959, Evangeline’s mother was tragically killed in a plane crash and Sissy, as Evangeline was affectionately called, became the caretaker and mother figure for her three younger siblings. In 1962, Evangeline married a handsome young preacher who, under the guidance of her father, had started a church in Cutler, Illinois while attending Southern Illinois University. Evangeline’s mother had spotted him walking around the Illinois District UPCI Campground. Before Hilda passed, she remarked to Sissy that, “he was a fine young man.” Evangeline always felt grateful that she had this confirmation that her mom had helped her pick just the right man with whom to share her life and ministry. The couple worked hard to see the small home mission’s work grow into a thriving congregation with an average attendance of 177 after nine years. In 1968, the Rodenbushes with their one-year-old son Rob, were appointed as the first resident missionaries to Ghana, West Africa, arriving in Accra in 1969. During their 10 years in West Africa, they opened five countries: Ghana, Nigeria, Togo, Benin, and Ivory Coast. Great revival spread throughout these nations and thousands were baptized in Jesus’ Name and filled with the Holy Ghost. More than 250 churches were established in the five nations of West Africa. The Rodenbushes were pioneers of training national leaders beginning with the Ghana College of Bible founded by the couple in 1970. In 1978, the Rodenbushes were appointed by the UPCI General Board to serve as the Coordinator of Overseas Ministries. Evangeline was a vital part of this ministry as together they founded the short-term mission’s concept Associates in Missions (AIM), led the annual School of Missions training for missionaries, assisted in launching and leading Compassion Services International (CSi), The China Outreach which took Bibles and Christian literature into Communist China, and many other initiatives. In 1990, Robert and Evangeline were asked to serve as the Regional Director of the Europe & Middle East Region. In this role they coordinated the work of missionary personnel, national leaders, preachers, and believers in an area spanning 14 time zones, encompassing 76 nations and territories, and 1.2 billion people. Evangeline was integral to the successful efforts to expand UPCI Global Missions work in this region. She and her childhood friend Rev. Judy Doughty of Apostolic Center Church, Mattoon, Illinois instituted prayer walks and led prayer teams that became an important factor in fostering the burden for this vast assignment. Under their leadership 42 nations were opened to the Gospel and now have a church, missionary, or established believers. During their 20-year tenure the work in the Europe & Middle East Region grew more than 500%. In 2011, the Rodenbushes retired from UPCI Global Missions and moved to Indianapolis, Indiana to serve alongside then Executive Vice President Rob and Dean of Administration and Director of Women’s Ministries Jaye at Indiana Bible College (IBC) continuing their legacy of mentorship, teaching, and training. Together the Rodenbushes founded, developed, and launched the IBC Missiology Department. In 2016, in recognition of more than 54 years of service to the Kingdom, Evangeline was ordained by the United Pentecostal Church International as a Minister of the Gospel. Evangeline Rodenbush was a minister, missionary, encourager, mentor, teacher, and friend. She loved God, she loved people – especially missionaries and their children. “When you marry a minister, you marry his ministry.” She never complained, just packed and unpacked, waited long hours in airports, train stations, and bus depots around the globe. She traveled to 137 countries, flew over two million miles, and one year spent only 21 nights at home in her own bed. She was a true Hero of the Faith, a woman of grace and class and anointed by God, a devoted wife, a loving mother, and the best Nana ever. Evangeline is survived by her husband of nearly 59 years, Rev. Robert K. Rodenbush; one son, Rev. Robert L. (Rob) Rodenbush, and daughter-in-law Jaye Mooney Rodenbush; two beloved grandchildren Micki Evangeline and Robert Mooney; a brother Arthur Earl Simpkins (Jeanine); and two sisters Mary Elizabeth Tyler (Robert) and Cheryl Lynn (Sherrie) Taylor (Richard). Evangeline was preceded in death by her older brother, Theodore George (Ted) Simpkins (1941-1987); her mother Hilda (Froese) Simpkins (1916-1959) and father Ezra LeRoy (Roy) Simpkins (1912-1976); stepmother Emma May (Cox) Simpkins (1916-1971); and stepmother Leona Pearl (Harrison) Simpkins (1918-2009) (affectionately known as Granny-Great to Micki Evangeline and Robert Mooney). Memorial contributions may be made to: The Rev. Evangeline Rodenbush Memorial Missions Fund Apostolic Center Church, 205 Country Club Road, Mattoon, IL 61938 This fund is established in memory of Rev. Evangeline Rodenbush to sponsor missionaries, mission's projects, and scholarships. The family would like to give special thanks to: Apostolic Center Church & The Doughty Family For their kindness, encouragement, and support during this time. www.apostoliccenter.net Woodlawn Family Funeral Centre Dan & Betsy Christensen 311 Holiday Square Road Seymour, IN 47274 www.woodlawnfamilyfuneral.com Mitchell-Jerdan Funeral Home Ltd. Greg Jerdan 1200 Wabash Avenue Mattoon, IL 61938 www.mitchell-jerdan.com

On Tuesday, February 16, 2021, our dear Evangeline Rosine Rodenbush passed peacefully from this life into the loving arms of her Savior at 2:05 a.m. at her home in Indianapolis, Indiana. Her devoted husband Rev. Robert K. Rodenbush and her loving... View Obituary & Service Information

The family of Rev. Evangeline R. Rodenbush created this Life Tributes page to make it easy to share your memories.

Send flowers to the Rodenbush family.