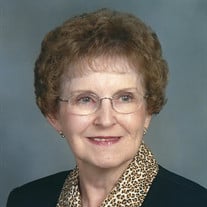 Mattoon, IL – Jean Black, age 82, of Mattoon, IL, passed away at 7:31 a.m., Friday, July 31, 2015, at St. John’s Hospital in Springfield, IL. The funeral service in her honor will begin at 12:00 p.m., Wednesday, August 5, 2015, at Mitchell-Jerdan Funeral Home, 1200 Wabash Avenue, Mattoon, IL, 61938. Pastor Rob Betts will officiate. Interment will follow in Zion Church Cemetery, rural Bridgeport, IL. Visitation will be held at the funeral home from 10:00 a.m. until the service begins. Born April 26, 1933, in St. Francisville, IL, Jean was the daughter of Edward Harold and Bonnie Lucille (Johnson) Rinck. She married Ted R. Black on December 27, 1953, in Lawrenceville, IL. He passed away April 29, 1992. Survivors include two sons: Bruce Black and wife Cindy of Peachtree City, GA, and Todd Black of Mattoon, IL; and five grandchildren, Matthew Black of Chicago, IL, Suzanne Black and Gabriel Black, of Mattoon, IL, Austin Black and Peyton Black, of Peachtree City, GA. She also leaves her beloved dog, “Bella” who was her constant source of joy. In addition to her husband, Jean was preceded in death by her parents. For more than 25 years, Mrs. Black had worked as a secretary for the State of Illinois Department of Human Services. She was a member of the LifePointe Church of Mattoon, and a former member of the First United Methodist Church of Mattoon. Other memberships included ABWA Pegtown Chapter of Mattoon, Epsilon Sigma Alpha of Mattoon, and a Tai Chi Class at Mattoon YMCA. Her favorite pastimes included traveling and attending activities and events of her children and later, her grandchildren. She was a loyal fan and supporter of the Mattoon High School Pride of the Greenwave Band which has been directed by her son Todd for twenty four years and was previously directed by her late husband, Ted. Memorials in her honor may be made to the Ted R. Black Memorial Fund for the Mattoon High School Band. Please visit www.mitchell-jerdan.com or www.facebook.com/mitchelljerdanfuneralhome to light a virtual candle in her honor or share a memory with her family.

The family of Eula "Jean" Black created this Life Tributes page to make it easy to share your memories.

Send flowers to the Black family.