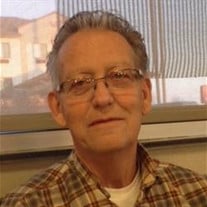 Mattoon, IL – Eric “Rick” VonBehrens, age 68, of Mattoon, IL, passed away at 5:21 p.m., Thursday, April 7, 2016, at Barnes-Jewish Hospital in St. Louis, MO. The funeral service in his honor will begin at 11:00 a.m., Monday, April 11, 2016, at Lake Land Church of Christ, Mattoon, IL with David Ferguson officiating. Visitation will be held at the church from 9:00 a.m., until the service begins. Mitchell-Jerdan Funeral Home, located at 1200 Wabash Avenue, Mattoon, IL 61938, is assisting the family with arrangements. Born July 29, 1947, in Mattoon, IL, Rick was the son of Laurence Harold and Mabel Alphea (Howe) VonBehrens. He married Beverly Jean Abbott on May 23, 1964, in Mattoon, IL. She survives. Other survivors include one daughter, Kelly R. Drum and husband Gary of Paris, IL; two grandchildren, Eric Douglas Shirley of Mattoon, IL, and Emily R. Tryon of Waverly, OH; and six great-grandchildren, Creisen Cross of Paris, IL, Zoe Harris of South Carolina, Chad A. Tryon of Waverly, OH, Erica R. Tryon of Waverly, OH, Veyda A. Shirley of Mattoon, IL, Gemma Shirley of Mattoon, IL, and Trinity Shirley of Mattoon, IL. He was preceded in death by his parents and one brother, John VonBehrens. Rick was the owner and operator of Rental Center, USA, in Mattoon, IL. He was an active member of the Lake Land Church of Christ and very close to his church family. He cherished traveling with his wife to enjoy the hustle and bustle of city life; he was especially fond of their trips to New York City. Rick treasured time with family, especially his grandchildren and great grandchildren. Memorials in his honor may be made to the Lake Land Church of Christ or the Gift of Hope Foundation. Please visit www.mitchell-jerdan.com or www.facebook.com/mitchelljerdanfuneralhome to light a virtual candle in his honor or share a memory with his family.

The family of Eric "Rick" VonBeherens created this Life Tributes page to make it easy to share your memories.

Send flowers to the VonBeherens family.