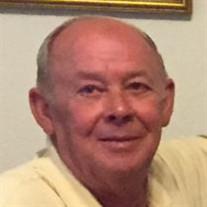 Mattoon, IL - Emmett N. Young, Jr. “Bud”, age 66, of Kingman, AZ, formerly of Mattoon, IL, went to be with his Lord and Father, surrounded by his loving family at the Joan & Diana Hospice House at 7:50 a.m., November 29, 2016. He was born to Emmett N., Sr. and Agnes (Van Gundy) Young on January 1, 1950 in Mattoon, Illinois. He attended school in Mattoon, IL, received certification in Management from Lake Land College and later attended classes at Purdue University, Kansas State Universities, as well as several certifications from Dale Carnegie. He was a Certified NARTE (National Association of Radio and Telecommunications Engineer), Master endorsement. While attending Mattoon High School he worked at Spitz Clothiers. After high school he enlisted in the United States Marine Corp, where he served in Viet Nam as a Field Radio Operator. After discharge from the service he went to work for Illinois Consolidated Telephone Company in many capacities, Installer, Installation Foreman, Cable Foreman, Service Center Manager and Construction Supervisor. In 1990, he moved his family to Kingman, AZ, where he was employed by Citizens Utilities as Contract Administrator, and later as the Engineering Contract Construction Manager. He married his high school sweetheart, Carole Clark on May 4, 1968, in Mattoon, IL. He is survived by his loving wife, Carole Young of Kingman, AZ; their three sons, Kenneth Young and wife Lori of Kingman, AZ, Craig Young and wife Sarah of Jasper, IN, and Christopher Young and wife Maria Leonora of San Diego, CA. He leaves seven grandchildren: Logan, Aislinn, and Dawson Young of Jasper, IN; Marissa Young of Mattoon, IL, Marilynn Santos of San Diego, CA, Blake Young of Kingman, AZ, and Christian Young of San Diego, CA. He also held close as “adopted” kids: Kassie & Jason Villa, Briona & Krista Harrah and Katie Smith, all of Kingman, AZ. He is survived by a sister, Joyce (Russel) Camfield and Sister-in-law, Janis Young, both of Mattoon, IL. He is survived by several aunts, uncles, cousins, nieces and nephews. He was preceded in death by his parents; two brothers, Roger and Robert; and one sister, Edna Tinsman. Bud belonged to Elks Club of Kingman, AZ, Moose &VFW of Mattoon, IL, and Illinois Farm Bureau. He loved to hunt with his sons, and be involved with grandkids activities. His favorite pastime was weekly family BBQ’s. He enjoyed watching Westerns and Christmas Movies with his grandkids. He made it a family tradition to watch the Grinch on Christmas Eve. His goal in life was to make memories for his family. He was loving, generous, and had a great heart. He had a great life with family, friends and co-workers. Funeral services will begin at 2:00 p.m., Tuesday, December 6, 2016, at Mitchell-Jerdan Funeral Home, 1200 Wabash Avenue, Mattoon, IL 61938, with Reverend Steven Hays officiating. Visitation will be held at the funeral home, Monday, December 5, 2016 from 6:00 PM to 7:30 PM. His final resting place will be in Dodge Grove Cemetery, Mattoon, IL. In lieu of flowers, please make a donation to Joan & Diana’s Hospice House, 812 Airway Avenue, Kingman, AZ 86409. Please visit www.mitchell-jerdan.com or www.facebook.com/mitchelljerdanfuneralhome to light a virtual candle in his honor or share a memory with his family.

The family of Emmett N. Young created this Life Tributes page to make it easy to share your memories.

Send flowers to the Young family.