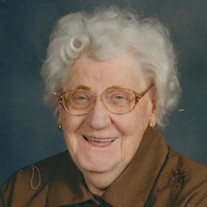 Mattoon, IL – Eloise (Piper) Mattoon, age 94, of Charleston, IL, formerly of Mattoon, IL, passed away at Hilltop Nursing and Rehabilitation Center in Charleston, IL at 9:47 p.m., Thursday, July 9, 2015. The funeral service in her honor will begin at 2:00 p.m., Tuesday, July 14, 2015, at Mitchell-Jerdan Funeral Home, 1200 Wabash Avenue, Mattoon, IL, 61938. Reverend Ken Hutchens will officiate. Burial will follow in Rest Haven Memorial Gardens. Visitation will be held at the funeral home from 1:00 p.m. until the service begins. Born May 23, 1921 in Sumner, IL, Eloise was the daughter of Charles and Elizabeth (McVickar) Piper. She married Hubert Mattoon on May 21, 1946, in Sumner, IL. He passed away on February 25, 2006. Survivors include their children, Richard Mattoon of Jacksonville, IL, and Joanne Roach and husband Doyle of Charleston, IL; two sisters: Rosemary Holtz of Coffeen, IL, and Kathryn McKenny of Toledo, IL; and a son-in-law, Richard Brutlag of Mattoon, IL. She leaves five grandchildren and six great-great grandchildren. In addition to her husband, she was preceded in death by one brother, Charles Robert Piper; one sister, Betty Lawson; and one daughter, Elaine Brutlag. Until retiring in 1980, Mrs. Mattoon worked as a secretary at Kankakee State Hospital in Kankakee, IL. She was a member of the Eastern Star Sumner Chapter, Daughters of the American Revolution- Governor Edward Coles Sally Lincoln Chapter in Mattoon, IL, and former president of the Senior Citizens Club in Mattoon, IL. Eloise was a member of the First United Methodist Church and had been active in the First United Methodist Women’s Circle. An avid bowler and long-time member of the Mattoon Women’s Bowling League, she competed in tournaments near and far. Eloise and her sisters were loyal Illini Basketball fans and rarely missed a game. She also enjoyed playing BINGO. Mrs. Mattoon’s late husband was the great grandson of the gentleman for whom Mattoon, IL is named. A group of men had built a train station at intersecting rail lines and had decided that the name of the town that would develop there would be determined by the winner of a poker game. Mr. Mattoon was victorious and bestowed his own name upon the town that would be. Memorial contributions honoring Eloise may be made to the First United Methodist Church, www.mattoonfirst.com, 1601 Charleston Avenue, Mattoon, IL 61938. Please visit www.mitchell-jerdan.com or www.facebook.com/mitchelljerdanfuneralhome to light a virtual candle in her honor or share a memory with her family.

The family of Eloise (Piper) Mattoon created this Life Tributes page to make it easy to share your memories.

Send flowers to the Mattoon family.