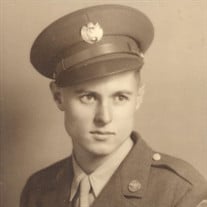 Mattoon, IL –E.J. “Army” Armstrong Jr. went to live with his Savior at 2:48 am Wednesday May 18, 2016 at Sarah Bush Lincoln Health Center. The graveside funeral service in his honor will begin at 11:00 a.m., Monday, May 23, 2016, at Dodge Grove Cemetery, James Galyon will officiate. Mitchell-Jerdan Funeral Home located at 1200 Wabash Avenue, Mattoon, IL 61938 is assisting the family. The son of Elmer J. and Clara (Hendricks) Armstrong, Elmer was born April 27, 1924, in Mattoon IL. He married Marian Louise Decker on January 14, 1945 she survives. Other survivors include two daughters, Dee (William) Galyon of Barnhart, MO, and Gail (Michael) Casey of Charleston, IL; five grandchildren, and six great grandchildren. He was preceded in death by his parents; one brother, Richard Armstrong, and a daughter, Vicki Ann Armstrong. Army had a lifelong love of airplanes and built and flew models in his youth. When he was 18 he joined the Army Air Force and became a top turret gunner/engineer on the B-17 Powerful Katrina-8th Air Force -379th Bomb Group. He flew 33 missions, 2 on D-Day over Normandy. Among the many medals he was awarded was the Bronze Star and the Distinguished Flying Cross. When he returned from the war he earned his private pilot’s license. He managed several airports in the area, including the Coles County Memorial airport. He was a 60 year member of the Experimental Aircraft Association. He was a long-time resident of Tuscola, IL, a past president of the Douglas County museum, and a member of the Tuscola Methodist Church. Memorials in his honor may be made to the St. Jude Children’s Research Hospital, 501 St. Jude Place, Memphis, TN 38105. Please visit www.mitchell-jerdan.com or www.facebook.com/mitchelljerdanfuneralhome to light a virtual candle in her honor or share a memory with her family.

The family of Elmer "Army" J. Armstrong created this Life Tributes page to make it easy to share your memories.

Send flowers to the Armstrong family.