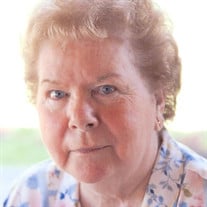 Ellen M. Davidson, age 87, of Mattoon, IL, passed away at 1:49 p.m., Tuesday, January 12, 2016, at Sarah Bush Lincoln Health Center. The funeral service in her honor will begin at 2:00 p.m., Friday, January 15, 2016, at Mitchell-Jerdan Funeral Home, 1200 Wabash Avenue, Mattoon, IL 61938. Pastor Johnny Aseltine will officiate. Burial will follow in Rest Haven Memorial Gardens. Visitation will be held at the funeral home, Friday, from 12:00 p.m. until the service begins. Born March 13, 1928, in rural Coles County, Ellen was the daughter of Paul D. and Agnes Ellen (Munson) Daily. She is survived by two children: Robert Davidson and wife Suzanne of Mattoon, IL, and Sue Buesking and husband Scott of Gays, IL; Two grandchildren: Andrea Bryan (her special daughter) and husband Dan of Webster Groves, MO, and James Davidson and wife Whitney of Arvada, CO; One step-granddaughter, Melissa Scott of Stonington, IL; One great-granddaughter, Penelope Jane Davidson, age 7 months, of Arvada, CO; Two step great-grandchildren: Shawna Withrow and husband Joel of Taylorville, IL, and Amanda Scott of Stonington, IL; Three sisters: Mary Jean Stone of Cooks Mills, IL, Lily Griffin and husband Don of Mattoon, IL, and Shirley Goode and husband Mike of Danville, IL; several nieces, nephews, great-nieces, and great-nephews. She was preceded in death by her parents; one son, Jim Davidson; three brothers, George William Daily, Robert Daily, and Melvin Daily; and three sisters, Ethel McDonald, Pauline Seelow, and Virginia Kinney. Mrs. Davidson was a member of the First Baptist Church of Mattoon, IL. Prior to her retirement in 1993, she had been employed by Kraft Foods of Mattoon, IL. Ellen’s favorite pastime was spending time with her children and grandchildren. When that was not possible, she enjoyed making things for others. She leaves many treasures created by her own hands in needle point, knitting, and crocheting. She brought a touch of beauty to this world with her flower gardens, and sweetened the lives of those for whom she baked and made candy, as well as anyone fortunate enough to have known her. Please visit www.mitchell-jerdan.com or www.facebook.com/mitchelljerdanfuneralhome to light a virtual candle in her honor or share a memory with her family.

The family of Ellen M. Davidson created this Life Tributes page to make it easy to share your memories.

Send flowers to the Davidson family.