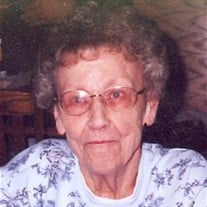 Mattoon, Il- Ellen Campbell, age 94, of Mattoon, IL, passed away at 11:07 p.m., Sunday, December 27, 2015, at Sarah Bush Lincoln Health Center in Mattoon, IL. The funeral service in her honor will begin at 1:00 p.m., Saturday, January 2, 2016 at Mitchell-Jerdan Funeral Home, 1200 Wabash Avenue, Mattoon, IL 61938 with Pastor Derold Doughty officiating. The visitation will be held at 11:00 a.m. until funeral service begins. Interment will follow at Dodge Grove Cemetery. Born on March 26, 1921 in Wayne County, IL, Ellen was the daughter of Charles and Cora (Anderson) Harper. She married William A. Campbell on May 7, 1946 in Mattoon, IL. He preceded her in death on May 9, 1958. She is survived by two daughters, Barbara Coble and Wanda (Dan) Milburn, both of Mattoon, IL; One sister, Roseanne (Jim) Shaw of Urbana, IL; Three grandchildren, Scott (Beth) Coble of Cooks Mills, IL, Amber Coble of Mattoon, IL, and Rebecca (Mitch) VanZant of Forsyth, IL; three great-grandchildren, Lynzee Campnell-VanZant, Lauren VanZant, Landon VanZant, and several nieces and nephews. She was preceded in death by her husband; her parents; three brothers, Gene Harper, Raymond Harper, and Don Harper; four sisters; Bernice Dove, Ethel Davis, Lucille Harper, and Georgia Patterson; one son, William F. Campbell and one grandchild, Travis Coble. Mrs. Campbell was a devoted member of the First Church of the Nazarene of Mattoon, Il, where she served as the Sunday School Secretary for 40 years. Employed by Brown Shoe Factory and Mattoon Garment Factory, she worked as a Seamstress until she retired. In her free time, Ellen enjoyed participating in arts and crafts. She loved flowers and spent time tending to her garden. Ellen Campbell will be greatly missed by her loved ones. Memorials in honor of Mrs. Campbell may be made to the Heart Association, or the donor’s choice. Please visit www.mitchell-jerdan.com or www.facebook.com/mitchelljerdanfuneralhome to light a virtual candle in her honor or share a memory with her family.

The family of Ellen Campbell created this Life Tributes page to make it easy to share your memories.

Send flowers to the Campbell family.