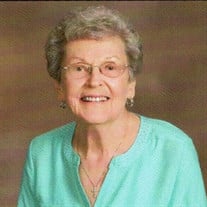 Eileen T. Simon, age 94 of Mattoon, IL passed away at 10:03 PM, Sunday, September 12, 2021, at Sarah Bush Lincoln Health Center in Mattoon, IL. A memorial mass in her honor will be held at 11:00 AM, Saturday, October 9, 2021, at the Immaculate Conception Catholic Church in Mattoon, IL. Burial will take place at Saint Mary’s Cemetery of Winona, Winona, MN at a later date. A luncheon will be held after the service at the church. Mitchell-Jerdan Funeral Home, located at 1200 Wabash Avenue, Mattoon, IL 61938 is in charge of arrangements. Eileen was born on March 2, 1927, in Winona, MN, the daughter of the late Harry and Louise (Lewinski) Satka. She married Robert E. Simon on June 18, 1949, in Gary, IN; he preceded her in death on June 2, 2009. She is survived by five children: Gail Furgason and husband David of Park Forest, IL, Tim Simon and wife Michelle of Naperville, IL, Barb Simon of Park Forest, IL, Beth Crabtree and husband Michael of Tacoma, WA, Robert Simon and wife Eva of Elk Grove, CA; ten grandchildren; three great-grandchildren; and one brother, John Satka of Crown Point, IN. She is preceded in death by her brother, Richard Satka; and sister, Mary Keyes. Eileen was a devout member of Immaculate Conception Catholic Church in Mattoon, IL and active in Daughters of Isabella organization. A true selfless individual, Eileen volunteered at Sarah Bush Lincoln Health Center Guild and Lincolnland Hospice for many years. She was the Fighting Illini’s biggest fan and enjoyed rooting for The University of Illinois sports teams. On Friday’s, Eileen looked forward to food and fellowship with her ladies’ lunch group. She will be remembered as a good-hearted woman and loving wife, mother, and grandmother. Memorials in her honor may be made to Immaculate Conception Catholic Church, 320 North 21st Street, Mattoon, IL 61938. Please visit www.mitchell-jerdan.com or www.facebook.com/mitchelljerdanfuneralhome to light a virtual candle in her honor or share a memory with the family.

The family of Eileen T. Simon created this Life Tributes page to make it easy to share your memories.

Send flowers to the Simon family.