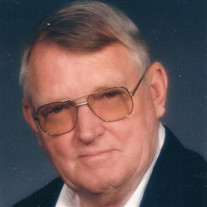 Edward Lee Wright, age 85 of Mattoon, IL passed away peacefully at 1:12 P.M., Monday, November 12, 2018 at Mattoon Health Care Center. A memorial service in his honor will be held at 11:00 A.M., Friday, November 16, 2018 at the First Presbyterian Church, 10 Charleston Ave, Mattoon, IL 61938 with Reverend Matthew Froeschle officiating. Burial will immediately follow at Dodge Grove Cemetery in Mattoon, IL. Military Rites will be conducted at the cemetery by Mattoon VFW Post 4325. The visitation will be held from 9:00 A.M. until the time of service at the church. Mitchell-Jerdan Funeral Home is assisting the family with arrangements. Edward was born on June 9, 1933 in Paris, IL the son of the late Guy M. and Mildred A. (Young) Wright. He married Betty J. Hitchcock on September 8, 1953. They shared a loving and devoted marriage for 65 years. He is survived by his wife, Betty Wright of Mattoon, IL; two sons, Michael A. Wright and wife Debbie of Mattoon, IL, Stephen L. Wright and wife Debbie of Charleston, IL; five grandchildren, Whitney Hastings, Courtney Ifft and husband Aaron, Jayma Nichols and husband Chris, Tyler Wright and fiancée Kim Ksiazkiewicz, Hannah Baker and husband Justin; nine great-grandchildren, Tanner Hastings, Rozalyn, Savannah and August Ifft, Addisyn, Emersyn and Fayth Nichols, Ava and Sophia Baker; one loving and caring nephew, Scott Wright and wife Mona, along with their daughter Anamarie Fayth; and two wonderful nieces, Linda Morrical and Becky Ueleke. He is preceded in death by his son, Randall G. Wright and one great-grandson, Beckett Grey Baker. Edward honorably served our country in the Army during the Korean Conflict for two years. He was stationed at an anti-aircraft site at the base of the Golden Gate Bridge, where Betty joined him. After discharge, they returned to Mattoon, IL. After a four year apprenticeship, he was then certified as a member of the Sheet Metal Local 218C in Champaign, IL. He retired in 1991. He was an active member of the First Presbyterian Church and former member Moose Lodge in Mattoon. Edward enjoyed camping and traveling, and had fond memories of the many times he and Betty traveled all over the world. Edward enjoyed life, family members and many friends. His memory will live on through them. The family would like to express their gratitude to the skilled and attentive nursing staff at Mattoon Manor. Also, a special thank you to Dr. Deters in the care he provided for Mr. Wright. Memorials in his honor may be made to First Presbyterian Church of Mattoon, 10 Charleston Ave, Mattoon, IL 61938 or Effingham Hospice, 503 N Maple, Effingham, 62401. Please visit www.mitchell-jerdan.com or www.facebook.com/mitchelljerdanfuneralhome to light a virtual candle in his honor or share a memory with the family.

The family of Edward Lee Wright created this Life Tributes page to make it easy to share your memories.

Send flowers to the Wright family.