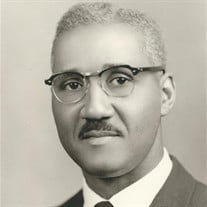 Edward Williams, age 95 of Mattoon, IL passed away at 6:54 A.M., Tuesday, May 22, 2018 at Odd Fellows-Rebekah Home in Mattoon, IL. A memorial service in his honor will be held Saturday, June 16, 2018 at 4:00 P.M., at Mitchell-Jerdan Funeral Home, 1200 Wabash Avenue, Mattoon, IL 61938; Reverend Earl Matthews will officiate. Military Rites will be conducted at the funeral home by the Mattoon VFW Post 4325. Burial will be held at a later date. The visitation will be held the same day from 2:00 P.M. until the time of service begins at the funeral home. Edward was born June 12, 1922 in Mattoon, IL, the son of Sidney and Luvenia (Smith) Williams. He married Juanita O. Estell Butler on November 22, 1969 in Mattoon, IL. He is survived by his wife, Juanita O. Williams of Mattoon, IL; one step-daughter, Paula Butler Murphy of Nashville, TN; one sister, Ethel Williams of Mattoon, IL; several nieces and nephews; and numerous cousins. He is preceded in death by his parents; three brothers, Sidney Williams, Robert Williams, and James Williams; and one sister, Mary Williams Derrickson. Edward honorably served our county during WWII in the Army and was stationed in India. He was employed by Clark Foundry for over thirty years, and then retired from Kal-Kan in Mattoon, IL after fifteen years. He was an active member of the Second Missionary Baptist Church in Mattoon, IL. Edward devoted his time to the church and his garden. He was a person of faith and lived life serving others. Please visit www.mitchell-jerdan.com or www.facebook.com/mitchelljerdanfuneralhome to light a virtual candle in his honor or share a memory with the family.

The family of Edward Williams created this Life Tributes page to make it easy to share your memories.

Send flowers to the Williams family.