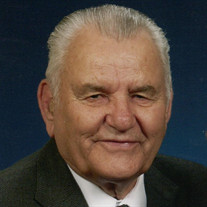 Earl William Bennett, 97, of Mattoon, Illinois passed away at 12:15 AM, Thursday, January 14, 2021 at Odd-Fellow Rebekah Home in Mattoon, IL. A graveside service will be held at a later date at Zion Lutheran Cemetery in Douds, IA. Mitchell-Jerdan Funeral Home, 1200 Wabash Avenue, Mattoon, IL 61938 is in charge of arrangements. Earl was born on a farm near Douds, IA, to the late Lester and Hendricka (Oosthoek) Bennett. He married Margaret Rebecca Crawford on September 2, 1947 in Douds, IA. He is survived by his wife of seventy-three years, Becky Bennett of Mattoon, IL; a daughter, Barbara Bennett of Laurel, MD; a son, William Bennett of Chicago, IL; and a niece, Geraldine Pearson of Pinecrest, TX. He was preceded in death by one sister, Marie Murphy of Casper, WY. Earl honorably served our country and enlisted in the United States Army Air Forces during WWII and flew with the Flying Tigers in the China Burma India Theater (CBI). He was awarded several medals including the Distinguished Flying Cross with oak leaf clusters and held the rank of captain. After the war, Earl graduated from the University of Missouri in 1950 and began a career as a transmission engineer. He later retired in 1988 from Ameren CIPS in Mattoon, IL. Earl enjoyed fishing, morel mushroom hunting, travel and playing cards. He earned the title of Life Master from the American Contract Bridge League and won many bridge tournaments with frequent partner and longtime friend, Ronald Wolf. Earl was a member of the First Presbyterian Church of Mattoon for over sixty years. Memorials in his honor may be made to the First Presbyterian Church, 10 Charleston Avenue, Mattoon, IL 61938. Please visit www.mitchelljerdan.com or www.facebook.com/mitchelljerdanfuneralhome to light a virtual candle in his honor or share a memory with the family.

Earl William Bennett, 97, of Mattoon, Illinois passed away at 12:15 AM, Thursday, January 14, 2021 at Odd-Fellow Rebekah Home in Mattoon, IL. A graveside service will be held at a later date at Zion Lutheran Cemetery in Douds, IA. Mitchell-Jerdan... View Obituary & Service Information

The family of Earl William Bennett created this Life Tributes page to make it easy to share your memories.

Earl William Bennett, 97, of Mattoon, Illinois passed away at...