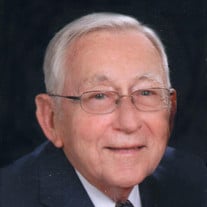 Duane Francis Welton, age 93, of Mattoon, IL passed away at 12:01 AM, Friday, June 3, 2022, at Odd Fellow-Rebekah Home in Mattoon, IL. A funeral mass in his honor will be held at 10:30 AM, Monday, June 6, 2022, at Immaculate Conception Catholic Church, 320 N. 21st Street, Mattoon, IL 61938. A committal service will immediately follow at Calvary Cemetery in Mattoon, IL with Military Rites performed by Mattoon VFW Post 4325. The visitation will be held from 9:00 AM until the time of service at the church. Mitchell-Jerdan Funeral Home, 1200 Wabash Avenue, Mattoon, IL 61938 is in charge of services. Duane was born on December 17, 1928, to the late Clarence Andrew and Elizabeth “Ella” (Stuckey) Welton. He married Mary Nanette “Nan” Rowe on April 24, 1954, in Mattoon, IL. She preceded him in death May 5, 2019. He is survived by his four children: Mark Welton and wife Kim of Mattoon, IL, Gary Welton and wife Ellen of Effingham, IL, Ann Jarvis of Effingham, IL and Susie Messman and husband Steve of Philo, IL; eight grandchildren: Laura Welton of Mattoon, IL, Hillary Ellington and husband Logan of Effingham, IL, Macey Welton of Mattoon, IL, Creighton Scott of Mattoon, IL, Kyle Messman and wife Shelbie of Philo, IL, Cassandra O’Rourke and husband Mitch of Effingham, IL and Brianna Messman of Philo, IL; two great grandchildren, Sawyer Alice Messman of Philo, IL, Harper Grace Ellington of Effingham, IL. He was preceded in death by one brother, Carl Welton and one infant granddaughter, Emily Grace Welton. Mr. Welton honorably served his country in the United States Army as part of the Military Intelligence Corps while stationed in Germany. Following his honorable discharge, he went on to earn his Bachelor and Master of Education from Eastern Illinois University in Charleston, IL. Committed to his profession and students, he was guidance counselor for numerous years for Mattoon Community Unit School District until his retirement in 1990. Duane later cofounded The Area Educational Credit Union, serving as a Board Member for thirty years and Chairman of the Board for many years. Furthermore, he was a past member of the Illinois Education Association, Mattoon Education Association, and Mattoon American Legion Post 88. A man of great faith and serving others, Duane was a devout lifetime member of the Immaculate Conception Catholic Church in Mattoon, IL, and a member of the Knights of Columbus for sixty-five years, where he also served as their Financial Secretary for twenty-five years. He loved spending his winters in Fort Myers Beach, FL, traveling on family cruises, and cheering for the Chicago Cubs. Above all else, Mr. Welton’s pride and joy was his family. He leaves behind a legacy filled with many wonderful memories and was a true inspiration to all. Memorials in his honor may be made to The Immaculate Conception Catholic Church. Please www.mitchell-jerdan.com or www.facebook.com/mitchelljerdanfuneralhome to light a virtual candle in his honor or share a memory with the family.

The family of Duane Francis Welton created this Life Tributes page to make it easy to share your memories.

Send flowers to the Welton family.