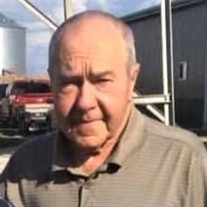 Doyle Dwane Parker, age 85 of Gays, IL, passed away at 8:27 PM, Tuesday, September 29, 2020 at Sarah Bush Lincoln Health Center in Mattoon, IL. Private family services will be held at 2:00 PM, Friday, October 2, 2020 at Mitchell-Jerdan Funeral Home, 1200 Wabash Avenue, Mattoon, IL 61938; Pastor Ron Dickinson will officiate. A committal service will immediately follow in Branchside Cemetery in Gays, IL. Military Rites will be conducted by Mattoon VFW Post 4325. Doyle was born on September 15, 1935 in Greenup, IL the son of the late Chester O. and Lenne I. (Snack) Parker. He married Nancy Jeanne Alexander on September 15,1956 in Gays, IL. He is survived by his loving wife of sixty-four years, Nancy Parker of Gays, IL; three sons, Ronnie L. Parker and wife Sharon of Las Vegas, NV, Joe Parker of Gays, IL, Larry T. Parker and wife Tracy of Shelbyville, IL; six grandchildren, Kristin Hulsizer of Greenbrier, TN, Regina Davis of Louisville, KY, Jocelyn Parker of Philadelphia, PA, Ryan Parker (Carol) of Windsor, IL, Dustin Parker (Ashley) of Windsor, IL, Haley Parker(Damien) of Sullivan, IL; fourteen great-grandchildren; and one great-great-grandchild. Doyle is preceded in death by one brother, Robert Parker, and one sister, Barbara Swank. Doyle honorably served our country in the United States Army stationed in Panama during the Korean Conflict from 1952 until 1955. He was a true patriot. An electrician by trade, Doyle retired from Ameren Cips Power Plant in Newton, IL after many years of service, and a former employee of Cabot Corporation and Usi Chemicals Company in Tuscola, IL. After his retirement, Doyle could be found tinkering in his shop and keeping all things maintained. Doyle was a faithful member of the First United Methodist Church in Mattoon, IL and held a membership at American Legion Post 725 in Windsor, IL. A true outdoorsman, Doyle’s heart was most content while hunting, fishing, camping, or traveling. He and his wife Nancy enjoyed their winters in Texas and appreciated the scenic beauty of Shenandoah National Park to the Great Smoky Mountains National Park while exploring the Blue Ridge Parkway. He enjoyed all that life had to offer and left a lasting impact on many. He will be fondly remembered. Please visit www.mitchell-jerdan.com or www.facebook.com/mitchelljerdanfuneralhome to light a virtual candle in his honor or share a memory with his family.

The family of Doyle Dwane Parker created this Life Tributes page to make it easy to share your memories.

Send flowers to the Parker family.