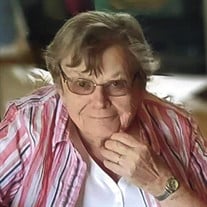 Dorothy M. Trame, age 90 of Mattoon, IL passed away at 11:55 PM, Friday, February 12, 2021 at Odd-Fellow Rebekah Home in Mattoon, IL. A funeral mass honoring her life will begin at 11:00 AM Saturday, February 20, 2021 at Immaculate Conception Church, 320 N. 21st St., Mattoon, IL 61938. Mitchell-Jerdan Funeral Home, 1200 Wabash Avenue, Mattoon, IL 61938 is in charge of services. Dorothy was born March 1, 1930 in Damiansville, IL the daughter of the late Martin and Dora (Johnson) Eilering. She married Joseph A. Trame on July 2, 1951 in Breese, IL; he preceded her in death January 7, 2010. She is survived by her children, Joseph T. Trame and wife Anieta of Mattoon, IL, Karen S. Rogers of Sullivan, IL, Kenneth M. Trame and wife Karen of Tolono, IL; six grandchildren, Trever and Brent Trame, Racheal Cushman, Sierra Tippens, Kurt and Kristina Trame; eight great-grandchildren; one great-great grandchild; and one sister, Emily Cortese of Waterbury, CT. She was also preceded in death by one great-great grandchild, two brothers, and four sisters. Dorothy was employed at Brown Shoe Company in Mattoon, IL for many years and later at Schrock’s Cabinet in Arthur, IL. She and her husband Joe had a keen eye for antiques and enjoyed collecting them to display at J & D Antiques which they owned for several years. Dorothy was a member of the VFW Auxiliary in Mattoon, IL where she had the privilege of working with her friends for the many causes they supported. Proud to be part of the group, Dorothy spent many nights helping with “The Bingo”, baking, and providing goodies for activities in need of treats. Above all, Dorothy cherished time spent with her husband and family. Her memory will live on in the hearts of the ones she so deeply loved. Memorials in her honor may be made to the Immaculate Conception Church or the donor’s choice. Please visit www.mitchell-jerdan.com or www.facebook.com/mitchelljerdanfuneralhome to light a virtual candle in her honor or share a memory with the family.

The family of Dorothy M. Trame created this Life Tributes page to make it easy to share your memories.

Send flowers to the Trame family.