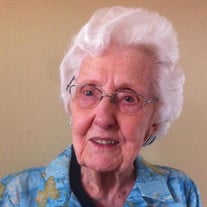 Dorothy Marie Shepard, age 100 of Mattoon, IL passed away peacefully at 10:00 AM, July 4, 2020 at Sarah Bush Lincoln Health Center in Mattoon, IL, A graveside service in her honor will be held at 2:00 PM, Friday, July 10, 2020 at Resthaven Memorial Gardens, 1701 Dewitt Ave, Mattoon, IL; Reverend Todd Krost will officiate. Mitchell-Jerdan Funeral Home, located at 1200 Wabash Avenue, Mattoon, IL 61938, is in charge of services. Dorothy was born in Zeigler, IL on December 28, 1919 to the late Charles Manning and Nellie Charlotte (Heiple) Smith. She married Donald B. Shepard in Branford, CT, March 4, 1946; he preceded her in death on July 1, 2006. She is survived by three sons, Richard S. Shepard (Millie) of Mattoon, IL; Donald B. Shepard (Dianne) of Champaign, IL; Thomas R. Shepard of New York City, NY; four grandchildren; Neeley D. Shepard of Las Vegas, NV, Donald B. Shepard III (Natalie) Calhoun, LA, Erin C. Law (Eric) Houston, TX, Lindsay D. Avdulahad (Martin) of Rochester Hills, MI; six great-grandchildren with one on the way. She is also preceded in death by one sister, Margaret Smith. Dorothy was an active member of First United Methodist Church, Mattoon, IL where she relished in gracing the congregation while singing in the choir. Dorothy was a former secretary for Shepard’s Plumbing and Heating in Mattoon, IL. On her 100th birthday celebration, the Mayor of Mattoon presented Dorothy with the Golden Key to the City of Mattoon in celebration of her life as a longtime resident of Mattoon, IL. Dorothy devoted her life to her family. She was a loving wife, mother and grandmother. She cherished every moment spent with family and friends, touching the lives of many. Memorials in her honor may be made to First United Methodist Church, 1601 Charleston Avenue, Mattoon, IL 61938. Please visit www.mitchell-jerdan.com or www.facebook.com/mitchelljerdanfuneralhome to light a virtual candle in her honor or share a memory with the family.

The family of Dorothy Marie Shepard created this Life Tributes page to make it easy to share your memories.

Send flowers to the Shepard family.