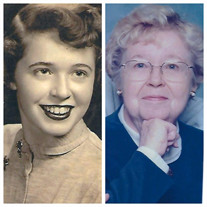 Doris A. (Tyle) Diedrich, age 88 of Mattoon, IL peacefully passed away at 10:18 P.M., Saturday, February 2, 2019 surrounded by her loving family. A funeral service in her honor will be held at 1:00 P.M., Thursday, February 7, 2019 at Mitchell-Jerdan Funeral Home, 1200 Wabash Avenue, Mattoon, IL 61938; with Pastor Travis Spencer officiating. Burial will immediately follow at Resthaven Cemetery. A visitation will be held Thursday morning from 11:00 A.M. until the time of service at the funeral home. Doris was born December 17, 1930 in Berwyn, IL to the late James J. and Rose C. (Kudera) Tyle. She married her devoted husband of sixty-six years, Richard “Dick” F. Diedrich on January 31, 1953; he survives. Other survivors include their three children; one daughter, Nanci Johnson and husband Bruce of Chandler, AZ; two sons, Dan Diedrich of Mattoon, IL, Doug Diedrich and wife Bridget of Mattoon, IL; and two grandchildren, Evan and Kristen Diedrich of Mattoon, IL. She is preceded in death by one brother, James Tyle, and one sister, Grace Tyle. Doris graduated Morton Junior College in Cicero, IL belonging to the first licensed class of Dental Assistants in the State of Illinois. She practiced as a Dental Hygienist until the time she and Dick started their family. Doris was a part of “Queen Court” in high school and junior college. She loved socializing and cherished her everlasting friendships with The Country Club Friday Couple Group and Women’s Mattoon Bowling League. She had a passion for traveling throughout the United States, Canada, and Europe. Doris was an expert in crafting, knitting, and sewing. She was an avid reader, gardener and antique collector. In 2013, Doris and Dick made headlines when her once lost high school sweetheart ring, given by Dick, was discovered by a gentleman in a Wisconsin lake sixty-three years later. He reached out to the alumni association to research the initials in the ring and discovered there were two students out of fifteen hundred with the initials of “R.D.” After contacting the other “R.D.” the gentleman finally came in contact with Dick and informed him of the unbelievable news. National media outlets shared the remarkable story and shed light on Doris and Dick’s love story. Doris was blessed with her first grandchild at the age of seventy-four. She attended all recitals and sporting events, beaming with pride and joy. Her family was the light of her life and Doris’s precious memory will live on through them. Memorials in her honor may be made to the Mattoon Community Food Center, 600 Moultrie Avenue, Mattoon, IL 61938; Mattoon Public Library, 1600 Charleston Avenue, Mattoon, IL 61938; Shriners Hospitals for Children, 2900 Rocky Point Drive, Tampa, FL 33607. Please visit www.mitchelljerdan.com or www.facebook.com/mitchelljerdanfuneralhome to share a memory with the family or light a virtual candle in her honor.

The family of Doris A. Diedrich created this Life Tributes page to make it easy to share your memories.

Send flowers to the Diedrich family.