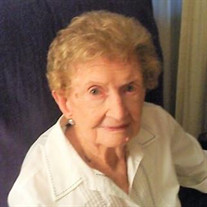 MATTOON, IL- Doris Marie Davis, age 99, of Mattoon, IL passed away at home on September 27, 2017, at 3:26 P.M. The funeral service will begin at 11:00 A.M., Saturday, September 30, 2017 at Immaculate Conception Catholic Church in Mattoon, IL. Burial will follow in Calvary Cemetery. Visitation will be held at 10:00 A.M till the time of service begins at the church. Mitchell-Jerdan Funeral Home, located at 1200 Wabash Avenue, Mattoon, IL 61938, is assisting the family with arrangements. Doris was born on September 24, 1918 in Washington, IN, the daughter of Don and Harriet (Dorey) McGinnis. She was united in marriage to John E. Davis, Sr. on August 29, 1942 in Gulfport, MS. He preceded her in death on October 11, 2000. Mrs. Davis is survived by her son, John E. Davis Jr. and wife Connie of Charleston, IL; one granddaughter, Jamie Austin of Charleston, IL; two great-grandchildren, Jacie and Gage Akins of Charleston, IL. She is preceded in death by her parents, husband of fifty-eight years, and one brother, James W. McGinnis. Doris graduated from Mattoon High School. She was previously employed at Brown Shoe Factory, Koenig Furniture Factory, as well as a former bookkeeper for Mattoon Eagles Club and John Davis Implement, all of Mattoon, IL. She was a homemaker, wonderful cook, and caretaker to her family. Doris’ family was of most importance and they will miss her greatly. The family would like to give a heartfelt thank you to her caregivers, who have helped Mrs. Davis for the past nine years. Also, thank you to Lincolnland Hospice for your special care. Memorials in her in honor may be to Lincolnland Hospice, 1004 Health Center Drive, Mattoon, IL 61938, or Immaculate Conception Catholic Church, 320 N. 21st Street, Mattoon, IL 61938. Please visit www.mitchell-jerdan.com or www.facebook.com/mitchelljerdanfuneralhome to light a virtual candle in her honor or share a memory with the family.

The family of Doris Marie Davis created this Life Tributes page to make it easy to share your memories.