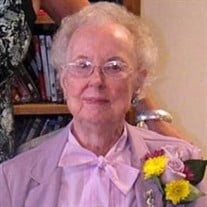 Doris M. Brown, age 97 of Mattoon, IL passed away at 5:07 A.M., Thursday, October 4, 2018 at Carle Richland Memorial Hospital in Olney, IL. A funeral service in her honor will be held Monday, October 8, 2018, 11:00 A.M. at Mitchell-Jerdan Funeral Home, 1200 Wabash Avenue, Mattoon, IL; Reverend Steven Gray will officiate. Burial will immediately follow at Dodge Grove Cemetery, Mattoon, IL. A visitation will be held from 9:00 A.M. until the time of service at the funeral home. Doris was born September 9, 1921 in Sullivan, IL the daughter of Bert R. and Susan E. (Ausburn) Kirkendoll. She married Leslie F. Brown on February 18, 1948 in Humboldt, IL; he preceded her in death in 1990. She is survived by her children, Leslie R. Brown and wife Billie of Allen, TX, Marcella L. Clark and husband Jack of Olney, IL; several grandchildren, great-grandchildren, and great great-grandchildren; two brothers, Marion E. Kirkendoll and wife Linda of Oregon City, OR, Robert “Pat” Kirkendoll and wife Janet of Garland, TX; and one sister, Catherine “Kate”Guyette of Mattoon, IL. She is preceded in death by a sister, Esther Janes and a son, Harlan Brown. Doris was employed by General Electric where she received a certification of recognition for many years of service. She attended the Maranatha Baptist Church in Mattoon, IL and former member of General Baptist Church. Doris served as President of Eva Buser Ministries, taught Sunday school for all ages, and assisted with Zion Home Extension. She belonged to the Service Club at DeMars Center and volunteered at Camp Kelso Children’s Church Camp. She enjoyed making noodles, pies and banana bread. She was an excellent cook and even had a “Doris Brown Cookbook” made in her honor. Doris loved reading the bible and donating to charities. Doris truly was a person of faith and lived her life serving others. Please visit www.mitchell-jerdan.com or www.facebook.com/mitchelljerdanfuneralhome to light a virtual candle in her honor or share a memory with the family.

The family of Doris M. Brown created this Life Tributes page to make it easy to share your memories.

Send flowers to the Brown family.