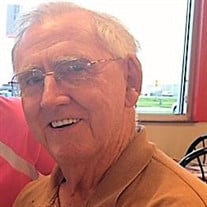 Donald Lee Tucker, age 80 of Mattoon, IL passed away Saturday, June 23, 2018 at 10:26 A.M., Odd Fellow-Rebekah Home Harmony Center, Mattoon, IL. A funeral service in his honor will be held at 12:00 P.M., Wednesday, June 27, 2018 at Mitchell-Jerdan Funeral Home, 1200 Wabash Avenue, Mattoon, IL 61938. Father John Titus will officiate. Burial will immediately follow at Calvary Cemetery. The visitation will be held from 10:00 A.M. until the time of service at the funeral home. Don was born January 20, 1938 in Mattoon, IL the son of Harry P. and Martha J. (Sickler) Tucker. He married Sharon A. Millar on March 1, 1958 in Corinth, MS. He is survived by his wife, Sharon Tucker; two sons, Brad D. Tucker and wife Cathy, Keith D. Tucker and wife Tonya; four grandchildren, Christina Welch and husband Tom, Michelle Cook, Hayley Kroening and husband Tanner, Clayton Tucker; four great-grandchildren, Olivia and Isabella Welch, Jackson and Tessa Cook; and one brother, Richard Tucker and wife Betty, all of Mattoon, IL. He is preceded in death by his parents; three brothers, Tony, Jack, and Thomas Tucker; two sisters, Edith Benedict and Katherine Franek. Don was a member of the Immaculate Conception Catholic Church in Mattoon, IL. He honorably served our country in the National Guard for four years and one year in the Reserves. He was a member of Architectural Metal and Glass Workers Union #1168 in Springfield, IL and employed by various glass companies throughout Illinois. Don was a former member of Mattoon Moose Lodge for many years. He was a skilled craftsman who enjoyed carpentry, building houses and barns, and creating beautiful leaded stain glass windows. His family was his pride and joy; he was their biggest fan. Don loved watching his children and grandchildren’s sporting events throughout the years, traveling all over in his RV to show his support and cheer loudly from the stands. His commitment to his family will never be forgotten and the legacy of Don’s hard working nature, love, and devotion will live through them. Memorials in his honor may be made to Odd Fellow-Rebekah Home Harmony Center, 201 Lafayette Avenue, Mattoon, IL 61938. Please visit www.mitchell-jerdan.com or www.facebook.com/mitchelljerdanfuneralhome to light a virtual candle in his honor or share a memory with the family.

The family of Donald Lee Tucker created this Life Tributes page to make it easy to share your memories.

Send flowers to the Tucker family.