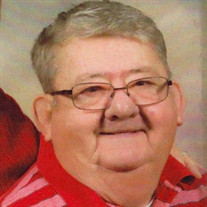 Donald “Donnie” L. Pennefather, age 72 of Mattoon, IL passed away at 9:40 AM, Sunday, August 11, 2019 at Sarah Bush Lincoln Health Center after a lengthy illness with family by his side. A funeral service in his honor will be held at noon, Friday, August 16, 2019 at Mitchell-Jerdan Funeral Home, 1200 Wabash Avenue, Mattoon, IL 61938; Reverend Don Pankey will officiate. A committal service will be held immediately after the service in Resthaven Memorial Gardens with Military Rites conducted by Mattoon VFW Post 4325. A visitation will be held from 10:00 AM until the time of service at the funeral home. Donnie was born in Charleston, IL on October 2, 1946, the son of Patrick L. and Dixie R. (Keigley) Pennefather. He married his high school sweetheart Judy A. Beachey on December 7, 1968. He is survived by his loving wife of fifty years, Judy Pennefather of Mattoon, IL; sister, Pam S. Seibert; brother, Gary Hawyer and wife Barb; nephew, Jeremy Hawyer and Ted, all of St. Augustine, FL; nephew, Travis Hawyer and wife Tara of Orange Park, FL; aunt, Patty Quigley of Mattoon, IL; mother-in-law, Catherine Beachey of Mattoon, IL; sister-in-law, Martha McCoskey of Longview, IL ;brother-in-law, Bob Beachey and wife Linda of Crossville, TN; and many cousins, great nieces and nephews, and fur baby, Oreo. Donnie was preceded in death by his parents; stepfather, Eldon Hawyer; father-in-law, Jake Beachey; brother-in-law, Harry Seibert; and nephew, Harry Seibert III. Donnie honorably served our country during the Vietnam War in the Army. He was employed by Catervend and farmed for the Overton family for many years. He was a member of Mattoon Eagles Lodge and Mattoon VFW Lodge 4325. He enjoyed listening to old time country music, watching NASCAR, cheering for Dale Earnhardt Sr. and Jr., and rooting for St. Louis Cardinals. Donnie was a proud lifelong resident of Mattoon, IL who enjoyed socializing amongst the community. He did not know a stranger and was the unofficial greeter at Wal-Mart. His zest for life and cheerful personality made a lasting impact on many and cherished forever. Memorials in his honor may be made to National Kidney Foundation of Illinois, 215 West Illinois, Chicago, IL 60654. Please visit www.mitchell-jerdan.com or www.facebook.com/mitchelljerdanfuneralhome to light a virtual candle in his honor or share a memory with the family.

Donald &#8220;Donnie&#8221; L. Pennefather, age 72 of Mattoon, IL passed away at 9:40 AM, Sunday, August 11, 2019 at Sarah Bush Lincoln Health Center after a lengthy illness with family by his side. A funeral service in his honor will be held... View Obituary & Service Information

The family of Donald L. Pennefather created this Life Tributes page to make it easy to share your memories.

Send flowers to the Pennefather family.