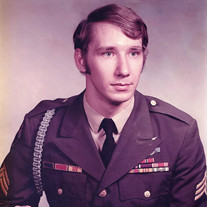 Donald “Joe” Easter, age 70 of Mattoon, IL passed away Saturday, March 10, 2018 at 4:15 P.M. at his home surrounded by his loving family in Mattoon, IL. The funeral service in his honor will be held at 12:00 P.M., Friday, March 16, 2018 at Mitchell-Jerdan Funeral Home, 1200 Wabash Avenue, Mattoon, IL 61938, with Pastor Travis Spencer officiating. Military Rites will be conducted at the funeral home by the Mattoon VFW Post 4325. Burial will be held at a later date. The visitation will be held the same day at the funeral home from 10:00 A.M. until the time of service. Joe was born January 26, 1948 in Mattoon, IL the son of Joseph and Thelma (Shriver) Easter. He is survived by his two children; one son, Brad Easter and wife Julia of Channahon, IL; one daughter, Megan Butler and husband Jeremy of Mattoon, IL; two stepchildren, David Wightman of Mattoon, IL, Teresa Hardy and husband Mark of Mattoon, IL; five grandchildren, Noah, Ethan, and Theodore Easter of Channahon, IL, Brayden and Owen Butler of Mattoon, IL; one special granddaughter, Haleigh Wightman of Mattoon, IL; two brothers, Loran Easter and wife Joyce of Virginia Beach, VA, Robert Easter and wife Tana of Mattoon, IL; one special sister, Tielaine Luechtefeld; and special friends, Dennis and Dorothy Anderson of Mattoon, IL. Joe is preceded in death by his parents and two brothers, Mike and Ralph Easter. Joe honorably served our country in the Army as a Sargent of Infantry during the Vietnam War, where he received the Bronze Star Medal, Presidential Unit Citation, two time Purple Heart Medal and Army Accommodations Medal recipient, and served in the Black Horse Brigade of First Cavalry Division. He was employed by RR Donnelly’s and a member of Mattoon Christian Church. He was a Lifetime Member of American Legion and VFW Post 4325, where he liked to spend his time socializing with friends. There was nothing more that he enjoyed than attending his grandchildren’s events and participating in the Veteran’s Day Parade at their school. Joe’s children and grandchildren were the center of his universe and they will miss him greatly. Memorials in Joe’s honor may be made to family in care of Mitchell-Jerdan Funeral Home. Please visit www.mitchell-jerdan.com or www.facebook.com/mitchelljerdanfuneralhome to light a virtual candle in his honor or share a memory with the family.

The family of Donald "Joe" Easter created this Life Tributes page to make it easy to share your memories.

Send flowers to the Easter family.