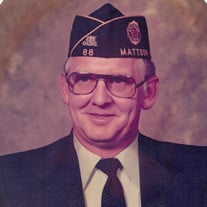 Donald Cleo Ballinger, age 81 of Humboldt, IL passed away at 2:26 PM, Saturday, November 2, 2019 at Sarah Bush Lincoln Hospital in Mattoon, IL. A funeral service in his honor will be at 2:30 PM, Thursday, November 7, 2019 at Mitchell-Jerdan Funeral Home, 1200 Wabash Avenue, Mattoon, IL 61938 with Reverend Ron Dickinson officiating; a committal service will follow in Roselawn Cemetery in Charleston, IL. Military Rites will be conducted by the US Army National Guard. A visitation will be from 1:00 PM until the time of service at the funeral home. Donald was born on January 2, 1938 in Toledo, IL the son of the late Clark D. and A. Naomi (Cox) Ballinger. He is survived by his two children; one son, Bruce D. Ballinger and wife Reyna of Rancho Palos Verdes, CA; one daughter, Gail E. Crouse and husband Mark of Mechanicsville, VA; four grandchildren, Brian, Karen, Samantha, Shelby; one great-grandchild, Sawyer; one sister, Bany Winn of St. George, UT; and five nieces, Cathy Abston of Charleston, IL, Terri Carpenter and husband Bill of Greenville, IL, and Debbie Hines and husband Jay of Mattoon, IL, Angie Esser and husband Neil of Altadena, CA, Robin Williams of Altadena, CA. He is preceded in death by his sister Natresia Biggs and nephew Joe Abston. Donald honorably served our country in the Army National Guard for over thirty years and was employed by General Electric for forty years. He was a dedicated Life Member of American Legion, Sons of American Legion 4088, Life Member of Patriots and Life Member of Mattoon Eagles Lodge. Donald was a member of Kaskaskia Country Club and an avid golfer. He was a devout sports fan, who enjoyed watching baseball and college basketball, and coached JC baseball for several years. He had a passion for old western movies, woodworking and making furniture. Donald will be greatly missed but not forgotten. Memorials in his honor may be made to St. Jude Children’s Research Hospital, 501 St. Jude Place, Memphis, TN 38105. Visit www.mitchelljerdan.com or www.facebook.com/mitchelljerdanfuneralhome to light a virtual candle in his honor or share a memory with the family.

Donald Cleo Ballinger, age 81 of Humboldt, IL passed away at 2:26 PM, Saturday, November 2, 2019 at Sarah Bush Lincoln Hospital in Mattoon, IL. A funeral service in his honor will be at 2:30 PM, Thursday, November 7, 2019 at Mitchell-Jerdan... View Obituary & Service Information

The family of Donald C. Ballinger created this Life Tributes page to make it easy to share your memories.

Donald Cleo Ballinger, age 81 of Humboldt, IL passed away at...

Send flowers to the Ballinger family.