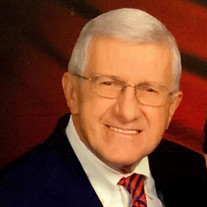 Derald C. Doehring, age 85 of Mattoon, IL peacefully passed away at 2:52 AM, Sunday, September 20, 2020 at Carle Foundation Hospital in Champaign-Urbana, IL. A funeral service in his honor will be held at 1:00 PM, Thursday, September 24, 2020 at St. John’s Lutheran Church, 200 Charleston Avenue, Mattoon, IL 61938; Reverend Willie Grills will officiate. A committal service will immediately follow in Dodge Grove Cemetery. The visitation will be held from 10:00 AM until the time of the funeral service at the church. Mitchell-Jerdan Funeral Home, 1200 Wabash Avenue, Mattoon, IL 61938 is in charge of services. Derald was born on February 12, 1935 in Lincoln, IL the son of the late Clarence E. and Leona A. (Werth) Doehring. He married Sara L. Dammerman on June 19, 1960 at Zion Lutheran Church in Lincoln, IL. He is survived by his dear wife of sixty years, Sara Doehring of Mattoon, IL; three children, Tim S. Doehring and wife Jayna of Newburgh, IN; Cynthia L. Phipps and husband David of Mattoon, IL; Chris S. Doehring and wife Angela of Seattle, WA; seven grandchildren, Kaitlyn Doehring of Austin, TX; Ryan Doehring of Newburgh, IN; Shelby Phipps of Seattle, WA; Riley Phipps of Chicago, IL; Mason Phipps of Mattoon, IL; Molly Doehring of Seattle, WA; Emma Doehring of Seattle, WA; and one brother, August Doehring of Fayetteville, TN. He is preceded in death by two sisters, Roma Knuth and Margaret Conrady. Derald graduated from Lincoln College in Lincoln, IL before being called to serve our country in the United States Army. He was stationed at the military base in Fort Riley, KS from 1955 until 1957. After his honorable discharge from the service, he continued his education at the University of Illinois at Champaign-Urbana where he received a bachelor’s degree in Accounting and was an active member of Beta Alpha Psi. In 1959, Derald became a Certified Public Accountant and joined the Decatur office of Murphey, Turnbull and Jones which later become Murphey, Jenne & Jones. In 1960, he and his wife moved to Mattoon, IL, where he eventually became owner and operator of Doehring, Winders & Co. LLP. His guidance and strong work ethic influenced many, so much that it led him to be named “Boss of the Year” from a local secretarial organization. He was a tireless and selfless volunteer for many local organizations and a pillar in the Mattoon community. In 2011, Derald was named Mattoon Area Chamber of Commerce Citizen of the Year for his continuous support of the Mattoon Area Family YMCA, Kiwanis Club, Sarah Bush Lincoln Health Foundation, Mattoon Public Library, Salvation Army, Lake Land College Foundation, Eastern Illinois University, and numerous other organizations. As a devout and active member of St. John’s Lutheran Church of Mattoon, Derald proudly sang in the choir and served as an elder for many years. He was an avid fan of Fighting Illini Men’s Basketball, the St. Louis Cardinals, and any activity involving his grandchildren. Derald will be remembered by many as a kind and friendly man with a warm, welcoming smile. His family was his pride and joy. They truly were the light of his life. Derald has left a lasting legacy of a devoted husband, father, and grandfather and as a true gentleman. Memorials in his honor may be made to St. John’s Lutheran Church or Sarah Bush Lincoln Health Foundation. Please visit www.mitchell-jerdan.com or www.facebook.com/mitchelljerdanfuneralhome to light a virtual candle in his honor or share a memory with the family.

Derald C. Doehring, age 85 of Mattoon, IL peacefully passed away at 2:52 AM, Sunday, September 20, 2020 at Carle Foundation Hospital in Champaign-Urbana, IL. A funeral service in his honor will be held at 1:00 PM, Thursday, September 24, 2020... View Obituary & Service Information

The family of Derald C. Doehring created this Life Tributes page to make it easy to share your memories.

Send flowers to the Doehring family.