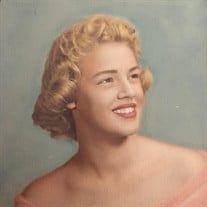 Charleston– Deanna Kay Irene Felton, age 72, of Charleston, IL, passed away at 10:25 a.m., Wednesday, September 14, 2016, at her residence. Private services will be held at a later date. Mitchell-Jerdan Funeral Home located in Mattoon, IL, is assisting the family. Deanna was born February 29, 1944, in Lawrenceville, IL, the daughter of John and Mary (Davis) Goodart. She married John Felton on June 3, 1961 in Lawrenceville, IL. She is survived by John, her loving husband of fifty-five years who resides in Charleston, IL; brother Mike (Bonnie) Goodart of Columbus, IN; three daughters; Jeanette Combs-Stagner and husband Ed of Charleston, IL, Patty Johnson and husband Tony of Charleston, IL, and Cathy Estes and husband Steve of Champaign, IL; 7 grandchildren, Brandon (Ashley) Combs of Charleston, IL, Quinton (Mallory) Combs of Charleston, IL, and Maddison Stumpf (Jeff) of Mt. Vernon, IL, Jennica and Jillian Estes of Champaign, Dylan & Deanna Johnson of Charleston & 7 great-grandchildren. She was preceded in death by her parents; and one brother, David Goodart. Deanna had been employed with Hilltop Skilled Nursing and Rehabilitation Center in Charleston, IL. In her free time, she enjoyed camping and spending time with family. She cherished her family and treasured time spent with them. In lieu of flowers the family would appreciate donations made to Lincoln Land Hospice in honor of Deanna Felton, which should be sent to Sarah Bush Lincoln Health Foundation 100 Health Center Drive P.O. Box 372 Mattoon, Illinois 61938. Please visit www.mitchelljerdan.com or www.facebook.com/mitchelljerdanfuneralhome to light a virtual candle in her honor or share a memory with her family.

The family of Deanna Kay Irene Felton created this Life Tributes page to make it easy to share your memories.

Send flowers to the Felton family.