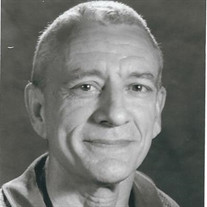 Mattoon, IL – David R. Sampson, age 73, of Mattoon, IL, passed away at 2:12 p.m., Monday, February 22, 2016, at Sarah Bush Lincoln Health Center. There will be a visitation from 4:00-7:00 p.m., Friday, February 26, 2016 at Mitchell-Jerdan Funeral Home, 1200 Wabash Avenue, Mattoon, IL 61938. There will be no services. Born September 4, 1942, in Charlotte, MI, David was the son of Raymond and Dorothy M. (Allen) Sampson. He married Karen M. Williamson on October 15, 1966. Survivors include his wife, Karen Sampson of Mattoon, IL; his mother, Dorothy Sliker of Sullivan, IL; two children, Angela Davison and husband Shawn of Arthur, IL, and Kyla Kuhns and husband Andrew of Philo, IL; three brothers, Kenneth Sampson and wife Barbara of Allenville, IL, Phillip Sampson and wife Karen of Sullivan, IL; and Mike Porter and wife Judi of Atwood, IL; two sisters, Sandra Eaton of Florida, and Lori Sampson of Michigan; and five grandchildren, Finnian Davison, Faeryn Davison, Faemus Davison, Asa Kuhns and Anna Kuhns. He was preceded in death by his father and a grandson, Samuel Kuhns. David graduated from Sullivan High School in 1961. He then earned a Bachelor’s of Science in Education and a Master’s in Geography from Eastern Illinois University. For 34 years, David was a teacher with the Mattoon Community Unit School District #2. After retiring, he then taught Geography and Weather and Climate at Lake Land College. He was a member of the Broadway Christian Church and a lifetime member of the National Education Association. David was an outdoorsman and nature lover. His hobbies included trapping, vegetable gardening, woodworking and construction, however, his favorite pastime was spending time with his family, especially his children and grandchildren. In lieu of flowers, memorials in his honor may be made to the David R. Sampson Scholarship Fund by making checks payable to Mattoon High School and indicating Sampson in the memo. The mailing address is 2521 Walnut Avenue, Mattoon, IL. Please visit www.mitchell-jerdan.com or www.facebook.com/mitchelljerdanfuneralhome to light a virtual candle in his honor or share a memory with his family.

The family of David R. Sampson created this Life Tributes page to make it easy to share your memories.

Send flowers to the Sampson family.