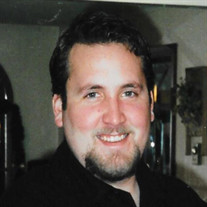 David Kenton Price, age 46 of Morton, IL, formerly of Humboldt, IL passed away on Tuesday, November 30, 2021. A private family service will be held at a later date. Mitchell-Jerdan Funeral Home, located at 1200 Wabash Avenue, Mattoon, IL 61938 is in charge of services. David was born on December 10, 1974, in Joliet, IL to Robert P. and Linda L. (Richards) Price. He was married to Jodie M. Aldrich, then later divorced but remained friends throughout the years. He is survived by his son, Kenton A. Price of East Peoria, IL; his father, Robert Price of Charleston, IL; two brothers, Richard “Rick” Price and wife Pam of Charleston, IL, Michael “Mike” Price of Norfolk, VA; one niece, Kayla M. Lewis of Hillsboro, MO; one nephew, Sean P. Price of Charleston, IL; close friends he considered family, Linda Heineman of East Peoria, IL, Allen Rogers of Morton, IL, and Lukas P. Price of Spring Bay, IL. He is preceded in death by his mother, Linda Price. David was an iron worker for eighteen years with the Iron Workers Union Local #112 near East Peoria, IL. He enjoyed time spent with friends and family, especially the times fishing with his father and son and cooking Kenton his favorite meals. Those were the moments he treasured. He was a loveable teddy bear who showed kindness and compassion to all. David could fill the room with laughter with his sense of humor. He will be remembered as a wonderful man and sorely missed by many. Please visit www.mitchell-jerdan.com or www.facebook.com/mitchelljerdanfuenralhome to light a virtual candle in his honor or share a memory with the family.

The family of David Kenton Price created this Life Tributes page to make it easy to share your memories.

Send flowers to the Price family.