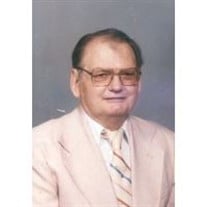 David R. Hudson, age 78, of Mattoon, passed away at 6:10 a.m. on Wednesday, February 15, 2006 at Douglas Rehabilitation and Health Care Center in Mattoon. The funeral service celebrating his life will be held at 10:00 a.m. on Saturday, February 18, 2006 at the Broadway Christian Church in Mattoon with Marvin Flowers, Lloyd Johnson, and Kevin Wolfe officiating. Interment will be in Ashgrove Cemetery near Windsor. Visitation will be held Friday evening from 5 -- 8 p.m. at Mitchell-Jerdan Funeral Home and one hour prior to the service at the Broadway Christian Church. Mr. Hudson was born near Bruce, Illinois on January 16, 1928, the son of Harry and Icel (Maxedon) Hudson. His mother passed away two months later and he was raised by his great aunt and uncle, Howard and Mertie Williamson. He was united in marriage to Mary McPherson by Pastor Chester Groves in the Neoga Christian Church on August 19, 1950. She survives. In addition to his loving wife, he is survived by his children, Ronald Hudson and wife Susie of Lincoln, Nebraska, Larry Hudson and wife Tammy of Mattoon, Darryl Hudson of Mattoon, Leslie Hudson and wife Michelle of Louisville, Kentucky, and Carol Hudson of Neoga; one sister, Gloria Pugh of Indianapolis, Indiana; 15 grandchildren, and 5 great grandchildren. He was preceded in death by his parents, one brother, and one sister. David graduated from Sullivan High School in 1946 and then served one year in the United States Army. He was formerly employed by Brown Shoe Company and then the United States Postal Service where he retired after serving as a letter carrier for 28 years. Mr. Hudson was a charter member of the Broadway Christian Church, a member of the Happy Timers Senior Group, and Believers Sunday School Class. One of his most treasured pastimes was attending his children''s and grandchildren''s musical performances and sporting events. He enjoyed flowers and gardening. He also enjoyed traveling and had visited all but 6 states. Memorials may be made to the Broadway Christian Church.

David R. Hudson, age 78, of Mattoon, passed away at 6:10 a.m. on Wednesday, February 15, 2006 at Douglas Rehabilitation and Health Care Center in Mattoon. The funeral service celebrating his life will be held at 10:00 a.m. on Saturday, February... View Obituary & Service Information

The family of David R. Hudson created this Life Tributes page to make it easy to share your memories.

Send flowers to the Hudson family.