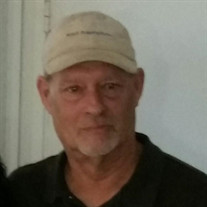 Mattoon, IL – David Brent Brandenburg, age 61, of Mattoon, IL, passed away at 6:36 a.m., Tuesday, March 8, 2016, at Sarah Bush Lincoln Health Center. The graveside service in his honor will begin at 10:00 a.m., Friday, March 11, 2016, at Cumberland Cemetery in Casey, IL. Reverend Dr. John Calio will officiate. Visitation will be held Thursday evening from 5:00-7:00 p.m., at Mitchell-Jerdan Funeral Home, 1200 Wabash Avenue, Mattoon, IL 61938. Born June 9, 1954, in Terre Haute, IN, David was the son of Stanley M. and Coralie (Black) Brandenburg. He is survived by his mother, Coralie Brandenburg of Mattoon, IL; one daughter, Hollie Goodman of Mattoon, IL; one brother, Kevin Brandenburg and wife Lisa of Mattoon, IL; one sister, Carole Thompson and husband Roy of Charleston, IL; a granddaughter, Sierra Rose Brandenburg of Mattoon, IL; and his former wife and mother of his child, Kim M. Goforth of Kenosha, WI. He was preceded in death by his father, Stanley Brandenburg. David was a member of the First Southern Baptist Church and had been employed as a maintenance worker with the Hampton Inn. David was an avid NASCAR fan and enjoyed spending time with his family and friends. Please visit www.mitchell-jerdan.com or www.facebook.com/mitchelljerdanfuneralhome to light a virtual candle in his honor or share a memory with his family.

The family of David Brent Brandenburg created this Life Tributes page to make it easy to share your memories.

Send flowers to the Brandenburg family.