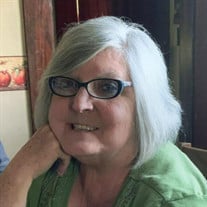 Darletta K. Drury, age 68 of Charleston, IL sadly passed away on Monday, January 3, 2022, at OSF Hospital in Peoria, IL. A funeral service in her honor will be held at noon, Friday, January 7, 2022, at Mitchell-Jerdan Funeral Home, located at 1200 Wabash Avenue, Mattoon, IL with Reverend Rick Emerich officiating. A committal service will immediately follow in Thomas Lincoln (Shiloh) Cemetery in Lerna, IL. The visitation will be from 10:00 AM until the time of service at the funeral home. Darletta was born on February 14, 1953, in Charleston, IL to late James R. “Bob” and Ruth M. (Scott) Young. She married Paul A. Drury on April 17, 1988, in Mattoon, IL; he survives and resides in Charleston, IL; three children, Michael R. Easton and wife Jackie of Hopkinsville, KY, Steven D. Easton of Mattoon, IL, Valerie L. Housman and husband Terry of Lerna, IL; four step-children, Karen Tenhagan and husband Alfon of Dairy, NH, Diane Ratliff and husband Ken of Lerna, IL, Charles Drury and wife Lisa of Fort Campbell, KY, Judy Walters and husband Chris of Ashmore, IL; four grandchildren, Michael R. Easton, JR. of Hopkinsville, KY, Courtney L. Risley and husband Ryan of Shelbyville, IL, Andrew D. Easton of Hopkinsville, KY, Hanna M. Housman of Lerna, IL; eight great-grandchildren; one brother, Robert Young and wife Darla of Trilla, IL; one sister, Glenna M. Gilkerson and husband Tim of Charleston, IL. Darletta is preceded in death by one sister and one brother. Darletta was a longtime employee of Mattoon Community Unit #2, where she worked as a cook for Mattoon Middle School and Mattoon High School throughout her dedicated years. Also, she served as a supervisor for Pleasant Grove Township. She was a lifetime member of VFW Post 1592 Auxiliary and Moose Lodge #1388 of Charleston, IL. She enjoyed spending time with her loved ones with a night filled with square dancing and playing bingo. Above all, she treasured her entire family. A devoted wife and loving mother and grandmother, Darletta cared deeply for her family. She will be lovingly remembered by all. Please visit www.mitchell-jerdan.com or www.facebook.com/mitchelljerdanfuneralhome to light a virtual candle in her honor or share a memory with the family.

The family of Darletta Kay Drury created this Life Tributes page to make it easy to share your memories.

Send flowers to the Drury family.