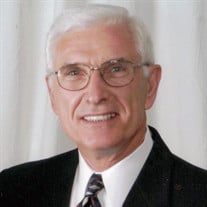 Danny “Dan” Paul Pilson, age 76 of Lerna, IL peacefully passed away at 2:45 PM Monday, July 15, 2019 at his residence surrounded by his loved ones. A funeral service for family and close friends will be held at 3:00 PM, Saturday, July 20, 2019 at Mitchell-Jerdan Funeral Home, 1200 Wabash Avenue, Mattoon, IL 61938; Pastor Josh Butler will officiate. A committal service will immediately follow in Dodge Grove Cemetery in Mattoon, IL. A celebration of life and gathering will be held Saturday evening, 5:00 PM -7:00 PM at Pilson Chrysler, Dodge, Jeep, Ram and Fiat Auto Dealership located at 2212 Lake Land Blvd in Mattoon, IL. Dan was born on January 28, 1943 in West Frankfort, IL the son of William and Almeta (Odle) Pilson. Sadly, William passed away in War World II when Dan was an infant. His mother later married James True, and he and Dan had a wonderful relationship. Dan married Diana R. Boesiger on February 27, 1965 in Arcola, IL. He is survived by his wife of fifty-four years, Diana R. Pilson of Lerna, IL; one son, James D. Pilson and wife Christine of Mattoon, IL; three grandsons, Jacob, Jared and Jack Pilson all of Mattoon, IL; two sisters, Sheila Moonshower and husband Jim of Marietta, GA, Lisa Lucier and husband Kevin of Marietta, GA, His parents preceded him in death. Dan bought the Mattoon, IL Dodge, Chrysler, Plymouth Dealership in 1980 and built a thriving business which today includes 3 locations, the Dodge, Chrysler, Jeep, Ram, Fiat store in Mattoon, the Ford, Lincoln Dealerships in Mattoon, IL and the Pilson Ram and pre-owned supercenter in Charleston, IL. Dan loved helping people. It didn’t matter if it was one of over 50,000 customers who purchased a vehicle or one of the many people who made a career stop at the Pilson Auto Center’s during Dan’s lifetime, Dan was always there to help, willing to do whatever it takes and jump in wherever needed. He believed in a hard day’s work, and led by example, working 6 days a week the majority of his career. His door was always open. Dan made time to build relationships with those around him. These qualities plus his belief in taking personal responsibility, making sacrifices for others and doing the right thing even when it is not easy make the business what it is today. Dan was a graduate of Arcola, IL High School, where he loved participating in athletics, making memories that last a lifetime. He continued his education at Eastern Illinois University where he earned a Bachelor’s Degree in Business. In adult life he continued to participate in sports including basketball, softball, tennis and pickleball. Dan’s love for sports carried over into the family. As a spectator he and Diana enjoyed watching their son, Jamie, and grandsons athletic and extracurricular events. You would see him at his son’s or grandson’s sporting events, always dressed impeccably but never ostentatiously, cheering and supporting those who meant the most to him. Dan was a quiet giver with a sincere love for Mattoon and the surrounding communities. He was always one of the first to contribute time or money to many organizations and individuals. He had a particular interest in youth and high school athletics, Big Brothers-Big Sisters volunteering as Big Brother, Camp New Hope, YMCA of Mattoon where he served as Past President and he and Diana have been an integral part of its growth. His reach also extended beyond our backyard by contributing to organizations like St. Jude’s Children Hospital, Shriners Children Hospital Champions Community Foundation FOCUS + Fragile Kids. Dan’s life exemplified “whatever it takes” both personally and professionally. He will be missed but never forgotten. Memorials may be made to the Multiple Myeloma Research Foundation or any of the organizations listed above. Please visit www.mitchell-jerdan.com or www.facebook.com/mitchelljerdanfuneralhome to light a virtual candle in his honor or share memory with the family.

The family of Danny "Dan" Paul Pilson created this Life Tributes page to make it easy to share your memories.

Send flowers to the Pilson family.